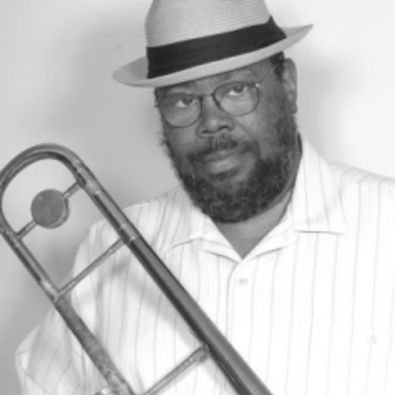 AJ Johnson is Assistant Professor at the University of Pittsburgh. He was Visiting Assistant Professor at Bates College in 2014-2015. AJ completed his Ph.D. in Historical Musicology at Columbia with the dissertation, "Jazz and Radio in the United States: Mediation, Genre, and Patronage." While a student at Columbia, AJ won the Meyerson Award for excellence in teaching Music Humanities.

Johnson is originally from Washington, DC where he received his earliest musical training in the public schools and in the DC Youth Orchestra. After earning the BSEE degree in Electrical Engineering and Economics from Carnegie Mellon University and the MS degree in Electrical Engineering from the Georgia Institute of Technology, AJ began a long dual career as a telecommunications engineer and as a freelance musician.

As an engineer, AJ was involved with optical fibers and networks, hybrid fiber/coax networks, digital video, and advanced DSL technology. As a musician, he has performed on trombone, bass trombone, tuba, conch shells, and bass clarinet with such noted artists as Reggie Workman, Jimmy Heath, Frank Foster, Aretha Franklin, Gladys Knight (with and without the Pips), Charles Tolliver, Oliver Lake, Steve Turre, Muhal Richard Abrams, and Jay-Z. He has performed with the Lincoln Center Jazz Orchestra, the Mingus Big Band, the Count Basie Orchestra, the Duke Ellington Orchestra, the Lionel Hampton Orcherstra, Frank Lacy's Vibe Tribe, and as a member of the Smithsonian Jazz Masterworks Orchestra. AJ Johnson released the CD Songs of Our Fathers (with Salim Washington, Onaje Allan Gumbs, Victor Lewis, and Robert Sabin) in 2009 featuring his compositions.

His research interests include jazz, popular music, film music, and music and technology.

For more information and a list of AJ's publications see http://www.music.pitt.edu/faculty/johnson