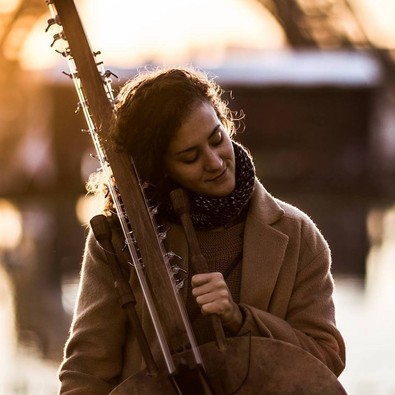 Althea SullyCole is a multi-instrumentalist, vocalist, and ethnomusicologist from New York City. She received a B.A. in Ethnomusicology at Barnard College in 2012; an M.A. with Distinction in Music in Development at the School of Oriental and African Studies, University of London, in 2016; and an M.A. in Ethnomusicology at Columbia University in 2018. Althea studied her primary instrument, the 21-stringed West African harp kora, under kora players Yacouba Sissoko and Edou Manga. She spent 3 years studying the instrument in Dakar, Senegal, where she was a resident artist at Bois Sakre studios. In addition to her solo work, she has performed with Billy Harper, Billy Bang, Fred Ho, Sahad Sarr, Daara J Family, Faada Freddy, Royal Messenger, LaFrae Sci, Lisette Santiago, Joseph Daley, Craig Harris, Ras Moshe, Muqi Li and father Bill Cole (in his Untempered Ensemble), among others. She has worked in live music and radio programming (Lincoln Center for the Performing Arts and WKCR, respectively, among others), in addition to a number of educational and archiving projects (Assocation for Cultural Equity, International School of Dakar, Musée de Thies, among others). She is currently the Associate Editor of Current Musicology, a contributing editor to the Society for Cultural Anthropology's podcast AnthroPod, co-chair of the Organology Special Interest Group at the Society for Ethnomusicology and a research assistant in the African Languages Studies Department at Columbia University. She has given a number of talks and facilitated panels at the Society for Studies in Africana Philosophy, CUNY Graduate Center, the People’s Forum, the Society for Ethnomusicology, the Left Forum, the Society for the Advancement of American Philosophy and the African Studies Association. Her writing has been published by the American Musical Instrument Society.