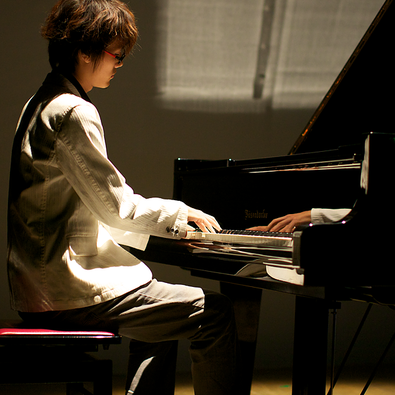 Chatori Shimizu (b. 1990) is a New York City based composer, shō performer, and sound artist, who constructs his works for a wide range of mediums concerning sound and space. Ranging from orchestral works to sound installations, all of his works engage in repetitive patterns of sound motifs, which aims for the slightest change in the pattern or a silence to act as an accent. As the First Prize Winner of Malta International Composition Competition, Shimizu's works have been performed and exhibited throughout the United States, Canada, Japan, China, and Europe. Shimizu has been awarded fellowships from Columbia University School of the Arts, Institute of Medieval Japanese Studies, the Mitsubishi Foundation, Omi International Arts Center, Soundstreams, Toshiba Foundation, Yaddo, among others. His music scores are published from United Music & Media Publishing, Belgium.

As a multi-instrumentalist, Shimizu has been actively participating in premiering works for piano written by himself and other composers. He received his Diploma in Piano Performance at the age of twelve from the Australian Guild of Music and Speech, with a recognition of the High Honours Award.

He has also performed extensively as a shō soloist, and has given lectures and demonstrations about the notation and extended techniques about Japanese instruments, in universities and institutions worldwide, such as Columbia University, Manhattan School of Music, University of Hawaii at Manoa, Conservatorio de Música de Puerto Rico, Tamagawa University, among others. In the summer of 2015, he has participated in the Gagaku-Hōgaku Mentor/Protégé Program, hosted by the Institute of Medieval Japanese Studies (Columbia University), as an assistant coordinator of the program.

Shimizu was born in Osaka, Japan, and spent his formative years in Singapore. He obtained his MFA in Sound Arts from Columbia University, New York City, and received his BA in Computer Music from Kunitachi College of Music, Tokyo, as a recipient of the Arima Prize, the highest honor bestowed upon the graduating class.