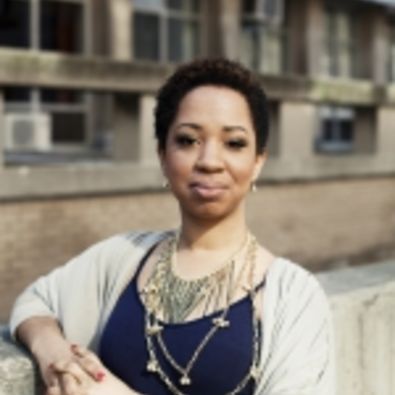 Dr. Bryan is currently a Visiting Fellow for 2014-2015 at the Center for African American Studies at Princeton University.

Courtney Bryan, a native of New Orleans, La, is “a pianist and composer of panoramic interests” (New York Times). Her music ranges from solo works to large ensembles in the new music and jazz idioms, film scores, and collaborations with dancers, visual artists, writers, and actors. She performs around the New York area, and is the Director of the Institute of Sacred Music at Bethany Baptist Church of Newark, NJ.

Dr. Bryan has academic degrees from Oberlin Conservatory (BM), Rutgers University (MM), and recently completed a DMA in music composition at Columbia University of New York, with advisor George Lewis. Bryan has been an instructor at Columbia University and Oberlin Conservatory, and this fall will be a Postdoctoral Research Associate in the Center for African American Studies at Princeton University. She has two independent recordings, “Quest for Freedom” (2007) and "This Little Light of Mine" (2010).

Bryan’s work has been presented in a wide range of venues, including Lincoln Center, Miller Theatre, The Stone, Roulette Intermedium, National Gallery of Art, Blue Note Jazz Club, Jazz Gallery, and Bethany and Abyssinian Baptist Churches. Upcoming commissions include an orchestra piece for the American Composers Orchestra and a collaborative piece with Urban Bush Women.

Her new work for orchestra and recorded sound was commissioned by American Composers Orchestra, for a premiere in 2015-16 at Jazz at Lincoln Center, Rose Hall. Her string quartet, commissioned by Spektral String Quartet for Mobile Miniatures Project, was premiered in 2014.