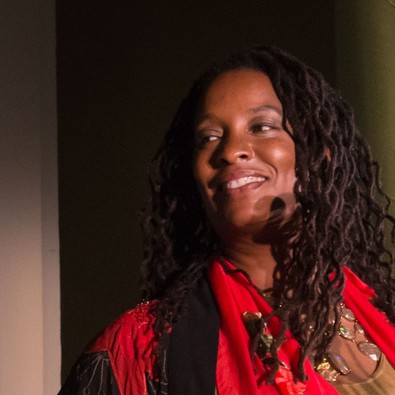 Dawn Norfleet is a Los Angeles-based composer, musician, and scholar. Her journey balancing music and academics began in Los Angeles, where her talents were nurtured by a musical family and music programs in public schools. After graduating with honors from Wellesley College, she attended Columbia University's Graduate School of Arts and Sciences, first earning an M.A. in musical composition, then a Ph.D. in ethnomusicology. While researching underground hip-hop culture in New York City for her doctoral dissertation, Dr. Norfleet discovered that city's vibrant jazz scene, starting her musical career among innovative jazz musicians of her generation, such as Vijay Iyer and Andy Milne. "Dr. Dawn" eventually returned to the West Coast and immersed herself in the Los Angeles music community, while maintaining ties to education and academia. In the realm of jazz and popular music, she has performed as a bandleader and accompanying musician, having performed with the likes of Marvin "Smitty" Smith and Jeff Lorber, and appeared on the Tonight Show as a flutist. As a vocalist, she records and performs with critically-acclaimed saxophonist, Kamasi Washington. She also recorded two selfproduced projects (available online) and participated in the Banff Workshop in Jazz and Creative Music, where she was mentored by advisors including jazz legend, Reggie Washington.

Early in her compositional studies, Dr. Norfleet was intrigued with the writings of Jean Toomer, and began creating concert musical settings from his 1923 masterpiece, Cane; a mission that spanned decades. Her first Toomer setting, “Prayer”, was a choral work composed as a grad student and originally presented at the Katherine Bache Miller Theater as a reading. Eventually, “Prayer” won a competition for emerging composers, and was premiered by the Leigh Morris Chorale in St. Paul, Minnesota. As a fellow with the Jazz Composers Orchestra Institute, her first orchestra composition, Seed, was selected for a reading by ACO at the Miller Theater. Seed was later premiered by the Bloomington Symphony Orchestra. During the COVID-19 pandemic of 2020, Dr. Norfleet was commissioned by ACO to create music for Brazilian vocalist-pianist, Clarice Assad. The two resulting pieces, “Vapayu” and “A Meditation”, were premiered online for ACO’s “Connecting Community” series. For two years, she was a Chou Wen-chung Fellow with the Gabriela Lena Frank Creative Academy of Music (GLFCAM), where she composed several additional pieces based on Toomer’s work, which were performed by Molly Morkoski, Jessica Rivera, and Duo Cortona. She was selected to join the GLFCAM collective, “Composing Earth…a uniquely robust commissioning program” that educates and challenges composers to use their creative and intellectual gifts to address urgent environmental issues.

Balancing her artistic and scholarly lives, she has taught courses in jazz and/or African American music at the University of California (Irvine and San Diego) and California State University Pomona. She was an Albert Seay Distinguished Professor of Music at Colorado College, and a scholar-in-residence at Grinnell College. Additionally, she lectures on African American music at institutions that have included Lewis and Clark and Occidental Colleges, Washington State University, University of California, Davis and University of Virginia, Los Angeles County Museum of Art, and California African American Museum. A passionate advocate for arts accessibility in underserved communities of color, Dr. Norfleet has served Los Angeles public school community as a trainer of educators and as a teaching artist. She also mentors new generations of thoughtful creatives through her work with Luna Lab, a Kaufman Music Center program guiding young women and non-binary composers, and as a volunteer with a NAACP youth initiative, cultivating creative gifts in talented high school students.

Garland Encyclopedia of World Music: the United States and Canada, “Hip-hop and Rap” (2000)

"A Meditation" by Dawn Norfleet, performed by Clarice Assad