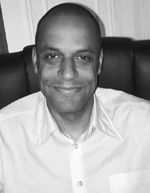 Dr. Harald Kisiedu defended his dissertation in Historical Musicology, "European Echoes: Jazz Experimentalism in Germany, 1950-1975" in 2014. He is currently Post-Doctoral Fellow at Memorial University of Newfoundland's International Institute for Critical Studies in Improvisation for 2016-2017, where he is completing a book project on jazz experimentalism in Germany between 1950 and 1975. The previous year he was a postdoctoral fellow at the University of Guelph.

Kisiedu's research interests include jazz as a global phenomenon, music of the African diaspora, black experimentalism, European post-war avant-garde, the intersection between music and politics, improvisation, transnationalism, and Wagner. He has written on Peter Brötzmann, Ernst-Ludwig Petrowsky, Muhal Richard Abrams, jazz and popular music in Terezín, and the political reception of Wagner’s Meistersinger von Nürnberg in the National Socialist Regime.

In addition to his Columbia doctorate, Harald Kisiedu holds graduate degrees in political science and German studies from the University of Hamburg. He has published essays on the political reception of Wagner's Meistersinger von Nürnberg during the National Socialist regime, jazz and popular music in the Terezin concentration camp, and the musical career of Peter Brötzmann. His research has been supported by Columbia's Center for the Study of Ethnicity and Race as well as by the American Musicological Society's Harold Powers World Travel Grant. In 2011 he was awarded a Howard Mayer Brown Fellowship from the American Musicological Society.

Kisiedu is also a saxophonist who has performed with Champion Jack Dupree, Hannibal Lokumbe, Branford Marsalis, George Lewis, and Henry Grimes. He has recorded with the musical collective Burnt Sugar The Arkestra