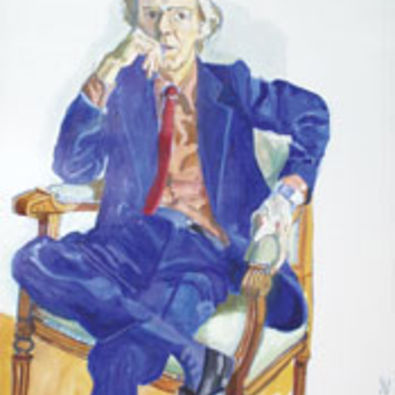 The Columbia musical community expresses our profound sadness at his passing, and deep gratitude for his many contributions to Columbia, and to music in general.

Prof. Beeson, who was a noted composer, as well as a  dedicated teacher, began his affiliation with Columbia in 1945, and chaired the Department of Music from 1968 to 1972. Among his many major contributions to the Department, he played crucial roles in founding the DMA program in Composition and the PhD program in Ethnomusicology.  He was named MacDowell Professor of Music in 1967, and awarded an honorary degree from Columbia in 2002. Jack Beeson was a beloved, accomplished, and dedicated colleague whose influence on our Department is still quite recognizable, 20 years after his retirement.  He remained active until the very end of his life, and lived an exemplary life in music.

Among Prof. Beeson's many contributions to American music more broadly, he was co-president of Composers Recordings, Inc., chairman of the board of the Composers’ Forum, member of the board of governors of the American Composers Alliance, the board of ASCAP, treasurer and vice president for music at the American Academy of Arts and Letters, of which he was a distinguished member;  and member of the Advisory Committee of the Alice M. Ditson Fund for 50 years, many of them as Secretary. Indeed, he chaired a Ditson meeting with his typical with and precision just two days before his passing.

Discussions of Prof. Beeson's distinguished artistic career can be found in the articles linked below. Among his best known works are the operas Lizzie Borden, Dr. Heidegger, and The Sweet Bye and Bye, but he was also noted for symphonic and song composition. A complete list of his compositions may be found here.

The Department community offers our sincere condolences to Prof. Beeson's wife Nora and daughter Miranda, and all the many other people affected by his passing.

Condolences may be sent to the Department at Columbia University, 621 Dodge Hall, MC 1813, Dept. of Music, NY NY, 10027.  We will forward them to Prof. Beeson's family. Information on a planned memorial concert will be posted soon.

A portrait of Jack Beeson by the late American painter Alice Neel, presented to Columbia by her sons Richard ’61C ’64L and Hartley ’63C.

It hangs in the Gabe M. Wiener Music and Arts Library.

Here are some further discussions of Prof. Beeson's contributions: