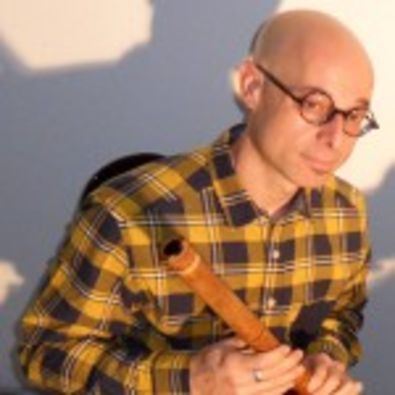 Jeffrey Lependorf is a composer and also a certified master of the shakuhachi, a traditional Japanese bamboo flute.  He currently serves as Director of the Music Omi International Music Residency Program in upstate New York, and also serves as the shared Executive Director of two beloved literary organizations: Small Press Distribution and the Council of Literary Magazines and Presses.His music has been performed around the globe--literally, in fact: a recording of his Night Pond for solo shakuhachi was launched into space when the shuttle Atlantis took off on May 15, 1997 and remained for a year aboard the Russian space station Mir.Much of his composition in recent years draws on canonical musical works used both as filter and raw material--in his operas, often fused with meticulous transcriptions of actual speech--drawing multiple layers of meanings from these disparate materials. Drawn also to the artistic possibilities inherent through collaboration, he has worked with a number of other artists. Together with longtime collaborator poet/performance-artist Jeffrey Jullich, he appeared as one half of Cabaret of Cruelty, the "Post-Artaud, Pseudo-Butoh, Performing Duo," at places such as The Kitchen and HERE; their song I Shall Kill Salman Rushdie the Blasphemer appears in Charles Bernstein's anthology, "Patterns, Context, Time." He has also collaborated extensively with sculptor/film-maker Luca Buvoli on a series of music, film and installation projects. His score for Buvoli's "Not-a-Superhero: Wherever You Are Not" received two weeks of repeat performances in the Piazza San Marco in conjunction with its showing at the Venice Biennale; installation work with Buvoli has also shown at places such as the Queens Museum of Art and Philadelphia Museum of Art. The "half-seated" cantata, If I Could Stand, If I Could Sit, or, Oh, Bill, Oh, Susan, his collaboration with downtown theater artist Stuart Sherman, opened the first Downtown Arts Festival in SoHo, New York and was performed with live simultaneous video feed (a rare occurrence at the time) to STEIM in Amsterdam. Recordings of some of his work are available on labels including Ayler and Sachimay, and through iTunes, Amazon.com and Spotify. He performs regularly on a variety of Asian bamboo flutes, including shakuhachi, xiao, bawu, hulusi and tanso, and his recent works for shakuhachi have explored compositions that incorporate improvisation within structured frameworks that explore proportion, appropriation and interplay.Born in 1962 in Philadelphia, Jeffrey Lependorf received a doctorate and masters in music composition from Columbia University and his undergraduate degree from Oberlin Conservatory. He also received the venerable honorific name "Koku" ("empty nothingness") from Kinko shakuhachi master Yoshinobu Taniguchi. His "Masterpieces of Western Music" audio-course is available through Barnes & Noble's "Portable Professor" series as well as for download through Audible.com.He has received support from the Jerome Foundation, USArtists International, Meet the Composer, New Dramatists Compost-Librettist Studio, Harvestworks A.I.R Program, Margaret Jory Fairbank Copying Assistance Program of the American Music Center, Blue Mountain Center, Art Omi International Arts Center, Millay Colony for the Arts, American Opera Projects Helping Hands, National Opera Association, National Endowment for the Humanities, Polish Cultural Institute, US Embassy in Kosovo, N1 Foundation, Olis Foundation, City of Munich, and the Arch and Bruce Brown Foundation. He has performed and had works performed across the United States, in Austria, Germany, Iceland, Ireland, Italy, Japan, Kosovo, Liechtenstein and Switzerland by such groups as the The Knights, Cassatt Quartet, Seattle Creative Orchestra, Belvoir Quartet, New Renaissance Chamber Artists, New Calliope Singers and others, at such venues as Music at the Anthology, Dance Theater Workshop, Symphony Space, The Vineyard Theatre, Philadelphia Museum of Art, Hudson Opera House, Cornelia Street Cafe, Miller Theatre, Knitting Factory, Merce Cunningham Studio, Wexford Arts Center, ABC no Rio, Roulette, The Stone, and the New York International Fringe Festival.Bio courtesy of his website.