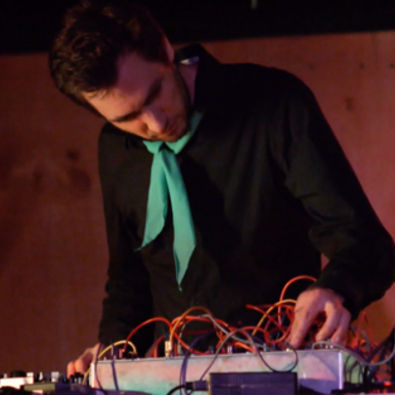 Jeff Snyder is a composer, improviser and instrument-designer living in Princeton, New Jersey, and active in the New York City area.

As founder and lead designer of Snyderphonics, Jeff designs and builds unusual electronic musical instruments. His creations include the Manta, which is played by over 150 musicians around the world; the JD-1 Keyboard/Sequencer, which was commissioned as a specialty controller for Buchla synthesizers; and the custom analog modular synthesizer on which he regularly performs.

Jeff is a member of experimental electronic duo exclusiveOr, avant jazz group The Federico Ughi Quartet , improvisatory noise trio The Mizries, and laptop ensemble Sideband. He fronts the band Owen Lake and the Tragic Loves as his electro-country alter-ego, Owen Lake. He also composes alternate-reality Early Music for an ensemble of his invented instruments.

In 2009, Jeff co-founded an experimental music record label, Carrier Records , which continues to release strange and exciting experimental music. In 2011, he received a doctorate with distinction in Music Composition from Columbia University. He currently is an Associate Research Scholar of Electronic Music at Princeton University, and the Director of PLOrk , the Princeton Laptop Orchestra.