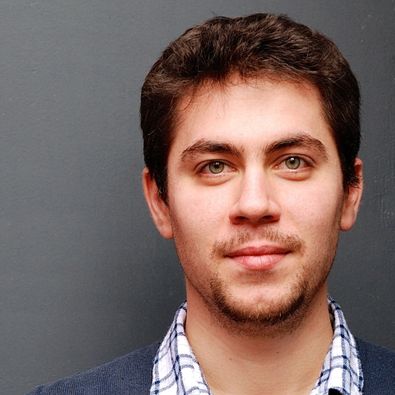 Stylianos Dimou is a Greek composer born in Thessaloniki in 1988. He began music studies at the Municipal Conservatory of Thessaloniki, degrees in Music Harmony (May 2005), Counterpoint (May 2008) and diploma in accordion (June 2010). He has pursued advanced studies in composition with Prof. Christos Samaras at the Aristotle University of Thessaloniki, Department of Music Studies (Greece, 2011, MM in Composition) and he has been nominated as a Fulbright Scholar continuing his Graduate Studies at the Eastman School of Music (USA, 2012, MA in composition). He is currently a D.M.A. candidate in composition at the Columbia University studying with Prof. Georg Friedrich Haas. Dimou has also attended Composition Workshops held in Europe and the USA studying close to Salvatore Sciarrino, Beat Furrer, Georges Aperghis, Brian Ferneyhough, Chaya Czernowin, Steven Kazuo Takasugi, Fabien Lévy, Oscar Bianchi, Hans Abrahamsen, Sofia Goubaïdoulina, Peter Eötvös, Luca Francesconi, Steven Stucky, Anders Hillborg and Augusta Read Thomas.

Striving to maintain the balance between visceral inspiration and intuition one of the fundamental principles of this work is the conception of structure as the potential byproduct of microscopic elaborations of the timbral and gestural dimensions of music. The technical aspects of it deal with fluidity and the sculpting of sound, means that aim to highlight a visceral and ductile gestuality. Blurred sonorities, harmonic fluidity and gestural formation are some of the ideas that he is elaborating on in his recent works.