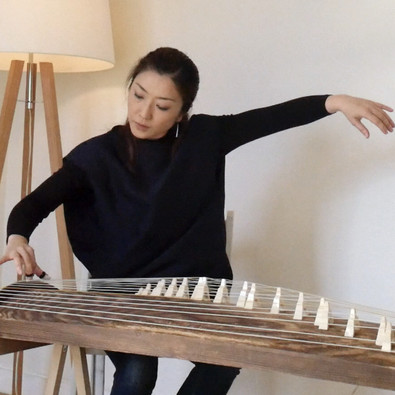 An award-winning Koto star from a young age, Yumi Kurosawa is one of today's most exciting soloists on Japan's national instrument. Born and raised in Japan, she started studying the Koto when she was three under her parents Kazuo & Chikako Kurosawa. She started studying 20 strings Koto under Nanae Yoshimura when she was 15 years old. Ms. Kurosawa received first prize at the National Japanese Koto Competition in 1989 and 1992, and a scholarship from The Agency for Cultural Affairs of Japan in 1998. She toured U.S., Canada, Malaysia and Russia. Her extensive performances in Japan in her teenage years have included appearances at Suntory Hall in Tokyo, and on NHK Broadcast TV programs.

Ms. Kurosawa has been based in New York since 2002. She made her Carnegie Hall debut in 2006. In 2011 she was principal soloist in the premiere of Daron Hagen's Koto concerto Genji with Orchestra of the Swan in Stratford-upon-Avon, UK. The concerto went on to be performed with conductor Naoto Otomo and the Hawaii Symphony Orchestra among others. In 2013 Ms. Kurosawa was principal soloist for the premier of The Memory Stone at the Houston Grand Opera. In 2015 she premiered the Ballet Tsuru for which she was commissioned by Houston Ballet and Asia Society Texas both as a soloist and composer. That same year she collaborated with Beyonce dancers Les Twins for a performance at the world heritage site Kiyomizu-dera, Kyoto. She performed at the World Economic Forum in Dalian, China, and was a soloist for the Koto & Shakuhachi concerto FUGAKU by Takashi Yoshimatsu with conductor Sachio Fujioka and the Tokyo Symphony Orchestra at Suntory Hall’s opening gala. Ms. Kurosawa was guest artist for Japanese Connection at Kennedy Center. She continues to perform in New York City at such venues as Joe’s Pub, the Highline Ballroom, the Blue Note, Apollo Theater, Symphony Space, Japan Society, Asia Society, Carnegie Hall and other concert halls. She was awarded a music residency at Pioneer Works. Ms. Kurosawa also performed at National Gallery of Art, Freer Sackler Gallery at Smithsonian Museum and Metropolitan Museum. In 2019, she was invited for the celebration of the 120 years anniversary for Japanese immigrants in Peru “Yumi Kurosawa Concert” was presented by Japan Embassy and Japan Foundation. In 2020, she was invited to the 30th anniversary of Australian Chamber Music Festival as the first Japanese traditional instrument player. She continues creating music for her original projects with Tabla, Violin, dance and so on. Ms. Kurosawa has released three records: Four Seasons (Vivaldi/Kurosawa, 2017), Looking Up At The Sky (2015), and Beginning of a Journey (2009). Ms. Kurosawa holds a Bachelor Degree in International Relations from Keio University Tokyo, Japan. Certified master from the SEIHA school.

Ms. Kurosawa has been lauded by the NY Times for her graceful musicianship,“drawing on a timbral palette that ranges from warm and rounded to bright and metallic.” She also has received praise in the Washington Post and other prestigious publications.