Book Launch: Arlen and Harburg's Over the Rainbow 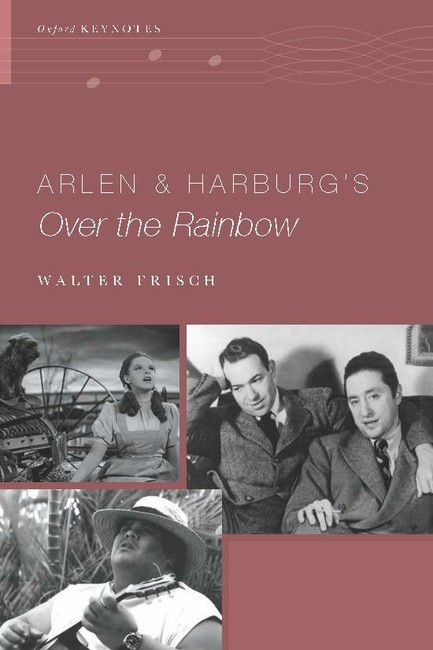 Come to Book Culture at 536 West 112th Street, Sunday, October 15th at 4pm, for a special discussion of Arlen and Harburg's Over the Rainbow with the author, Walter Frisch, and Kevin Fellezs.  Refreshments will be served.

"Over the Rainbow" surged into worldwide fame upon its performance by Judy Garland in the MGM film musical The Wizard of Oz (1939). Voted the greatest song of the twentieth century in a 2000 survey, it is a masterful, delicate balance of sophistication and child-like simplicity in which composer Harold Arlen and lyricist E. Y. "Yip" Harburg poignantly captured the hope and anxiety harbored by Dorothy's character.

In Arlen and Harburg's Over the Rainbow, author Walter Frisch traces the history of this song from its inception during the development of The Wizard of Oz's screenplay, to its various reinterpretations over the course of the twentieth century. Through analysis of the song's music and lyrics, this Oxford Keynotes volume provides a close reading of the piece while examining the evolution of its meaning as it traversed widely varying cultural contexts. From its adoption as a jazz standard by generations of pianists, to its contribution to Judy Garland's role as a gay icon, to its reemergence as a chart-topping recording by Hawaiian singer Israel Kamakawiwo'ole, "Over the Rainbow" continues to engage audiences and performers alike in surprising ways. Featuring a companion website with audio and video supplements, this book leaves no path unexplored as it succeeds in capturing the extent of this song's impact on the world.

Walter Frisch is H. Harold Gumm/Harry and Albert von Tilzer Professor of Music at Columbia University, where he has taught since 1982.  He is the author of Music in the Nineteenth Century (2012) has published and lectured widely on music of the Austro-German traditions of the nineteenth and twentieth centuries, including Schubert, Brahms, and Schoenberg.  He is currently researching the life and work of the song composer Harold Arlen.

Kevin Fellezs is Assistant Professor of Music and African American Studies at Columbia University, where he has taught since 2012. His book Birds of Fire: Jazz, Rock, Funk and the Creation of Fusion (2011) is a study of jazz-rock-funk fusion of the 1970s.  He has published articles in Jazz Perspectives, Journal of Popular Music Studies, the Institute for Studies in American Music Newsletter, and in prominent edited anthologies.