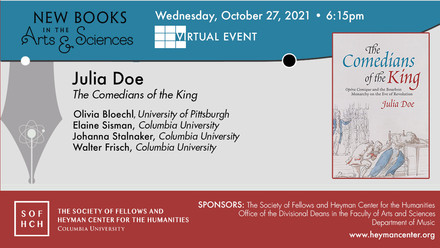 The Comedians of the King: "Opéra Comique" and the Bourbon Monarchy on the Eve of Revolution
by: Julia Doe

Lyric theater in ancien régime France was an eminently political art, tied to the demands of court spectacle. This was true not only of tragic opera (tragédie lyrique) but also its comic counterpart, opéra comique, a form tracing its roots to the seasonal trade fairs of Paris. While historians have long privileged the genre’s popular origins, opéra comique was brought under the protection of the French crown in 1762, thus consolidating a new venue where national music might be debated and defined.

In The Comedians of the King, Julia Doe traces the impact of Bourbon patronage on the development of opéra comique in the turbulent prerevolutionary years. Drawing on both musical and archival evidence, the book presents the history of this understudied genre and unpacks the material structures that supported its rapid evolution at the royally sponsored Comédie-Italienne. Doe demonstrates how comic theater was exploited in, and worked against, the monarchy’s carefully cultivated public image—a negotiation that became especially fraught after the accession of the music-loving queen, Marie Antoinette. The Comedians of the King examines the aesthetic and political tensions that arose when a genre with popular foundations was folded into the Bourbon propaganda machine, and when a group of actors trained at the Parisian fairs became official representatives of the sovereign, or comédiens ordinaires du roi.

Julia Doe will be joined by speakers Olivia Bloechl, Elaine Sisman, Joanna Stalnaker, and Walter Frisch. Drs. Sisman and Frisch are fellow professors in the Department of Music.

This event will take place in person and over Zoom. The Heyman Center requests that everyone register, regardless of how they'll be attending the event. For more information and to register for the event, please visit the event page.