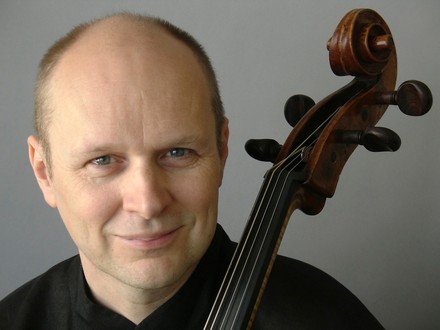 The inaugural concert of

This first concert in the new Columbia Sounds series at Columbia Global Centers | Paris featured compositions written for Anssi Karttunen by several of the most prominent composers who have studied or taught at Columbia (Edmund Campion, Tan Dun, Fred Lerdahl, Bryan Jacobs, Taylor Brook, Zosha Di Castri, Yoshiaki Onishi, Pablo Ortiz and Nina Young) and two Finnish composers, Magnus Lindberg and Kaija Saariaho. Lindberg and Saariaho have multiple relationships with all these composers and with Columbia’s Department of Music. Since friendship is the strong connection underlying all the works on the program, Anssi Karttunen wanted to include an homage to another close friend of his, Henri Dutilleux, whose Centenary falls on January 22, 2016. After the concert, Nina C. Young and Anssi Karttunen discussed the Creative Dialogue project that generated the Five Dialogues.

World-renowned cellist Anssi Karttunen is a passionate advocate of contemporary music as well as a venerated performer of the standard repertory. His collaboration with composers has led him to give over 140 world premieres of works by composers as diverse as Magnus Lindberg, Kaija Saariaho, Tan Dun, Luca Francesconi and Pascal Dusapin. 28 works for cello and orchestra have been written for him. He plays with many of the best orchestras of the world and in recitals and chamber music at major festivals in Europe such as those of Edinburgh, Salzburg, Lockenhaus, Spoleto, Berlin, Venice, Montpellier, Strasbourg, and Helsinki. His recordings (on labels such as Sony Classical and Deutsche Grammophon) range from Bach on a Violoncello Piccolo, Beethoven on a classical cello and 20th-Century works for solo cello to concertos with London Sinfonietta, Los Angeles Philharmonic and the Orchestre Philharmonique de Radio France with Esa-Pekka Salonen. Anssi Karttunen and Marina Chiche perform together in a trio with the French pianist Florent Boffard.

Described as a “world-class violinist” by the Süddeutsche Zeitung, Marina Chiche has a passion for chamber music and has worked with several generations of artists: Joseph Silverstein, Augustin Dumay, Renaud Capuçon, Pierre-Laurent Aimard, Vladimir Mendelssohn, Gustav Rivinius and Boris Berezovsky. She has recorded Brahms’ Violin and Piano Sonatas with Vahan Mardirossian for Intrada, and a solo program of music by Bach. As a soloist Marina Chiche plays regularly with orchestras such as Sinfonia Varsovia, Ensemble Orchestral de Paris, Orchestre National de Lille, Orchestre de Picardie, Baden-Baden Philharmonic or Kanazawa Ensemble. She has appeared in major venues across Europe and has been a guest artist of many festivals, in France and abroad (Printemps des arts in Monaco, Midem in Cannes, Menton, Pärnu Festival, Great Wall Festival in Beijing, La Folle Journée in Tokyo).