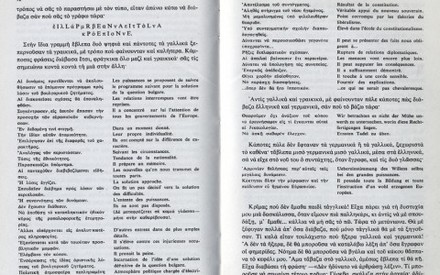 Karen Van Dyck, Xiaolu Guo, Kaiama L. Glover, and Zaid Jabri, all former fellows of Columbia’s Institute for Ideas and Imagination, will discuss their diverse practices of translation and transliteration, and the artistic and political consequences of living, working, and moving between languages. The conversation began in spring 2019 at the Institute in Paris around Karen Van Dyck’s research on translingual writing of the Greek Diaspora which addresses the multilingual lives of migrants as a resource for literature, translation and social policy. Various types of movement among places - diasporic, immigrant, exilic, cosmopolitan - imagine different forms of translation that emphasize diverse ways of moving among languages: diglossia, intralingualism, transliteration, homophony. Might such translingual collaborations offer alternative translation practices and solutions to the impasses of ethnocentrism?

Using two different writing systems (Chinese ideograms and the English alphabet), Xiaolu Guo will discuss migrant writers’ use of a second language to express their histories, and illustrate ways in which writers play with time and grammar to express a different point of view. Zaid Jabri will speak about his strategies of translation and transliteration in composing vocal music that draws on a variety of alphabets and languages, and takes into account the performance of the text in his piece “Love and Mercy" for chorus and large symphony orchestra based on text by Bar Hebraeus, sung in Syriac.

Kaiama L. Glover will address the ethics of literary translation as an act of representation within contexts of material and social disparity, focusing on the stakes and the practice of translating Réné Depestre’s 1988 novel Hadriana dans tous mes rêves, first to the space of metropolitan France and, subsequently, to an anglophone reading public – that is, to a global readership that most often views Haiti through the lens of irrevocable, demeaningly racialized difference. What does it entail to “carry over” meaning from a Haitian context to a non-Haitian, Euro-francophone audience and, from there, to an Afro-anglophone world? What is the task of the translator within this racially hierarchized transatlantic space?

The discussion will be moderated by Susan Boynton.