Discovering Prokofiev: Music and the Archive 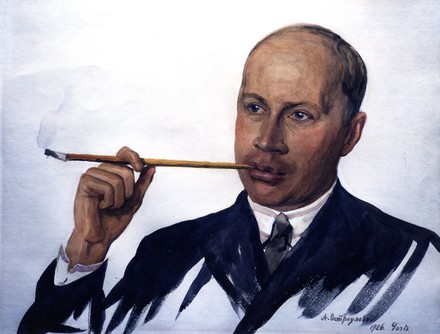 See the illustrated feature on this concert on the Global Center's website.

Columbia University has been a vital hub for Prokofiev studies since the deposit of a rich trove of the composer's archival material at the University in 2014. The Serge Prokofiev Archive, housed at Columbia’s Rare Books and Manuscript Library and supported by the Serge Prokofiev Foundation, is the premier research source on Prokofiev’s time in the West (1918-1936).

This concert initiates a yearlong commemoration by Columbia University of the 100th anniversary of Serge Prokofiev’s American debut in New York City. Cynthia Liu, CC ’18, will perform three piano works highlighting Prokofiev’s virtuosity as a composer and foregrounding the notions of interruption and irony, themes that recur brilliantly and tragically in Prokofiev’s art and life. Archivist Natalia Ermolaev (GSAS ‘10), an alumna of  Columbia's Department of Slavic Languages, will complement the music with insights from the archive, illustrating the importance of documentary traces in mapping the complex, transnational impact of Prokofiev’s music for the last century.

Cynthia (Cindy) Liu (CC ‘18) is a senior pursuing a B.A. in English and Sociology. Since beginning piano studies at age six, first with her teacher emeritus, Elena Arsenyev, and now her mentor, Dr. Magdalena Stern-Baczewska, Cindy has enjoyed performances in New York’s Carnegie and Steinway Halls; Washington, D.C.’s Kennedy Center Concert Hall and Hungarian & Austrian embassies; her parents’ hometowns in China, Beijing and Neixiang; Toronto; and Paris. Cindy is writing a Sociology thesis entitled "Why Have There Been No Great Female Musicians?: Occupational Barriers to Women in the Classical Music Industry," and has carried out research on Sergei Prokofiev’s formative time in Paris, presented in a paper entitled “Prolific, Passionate, Pivotal: Prokofiev in Paris.”

Natalia Ermolaev (GSAS ‘10) is the archivist for the Serge Prokofiev Archive at Columbia University. She has a PhD in Russian Literature from Columbia (2010) and a Master’s in Library Science from Rutgers University (2013). Natalia specializes in the Russian émigré community in interwar Paris, and was a Reid Hall Fellow in summer 2006. Working at the intersection of archival studies, information science, and literary history, Natalia is the Assistant Director of the Center for Digital Humanities at Princeton University.