Faculty Focus Series: Why do we move to music? (Why do we music to move?), with Mariusz Kozak 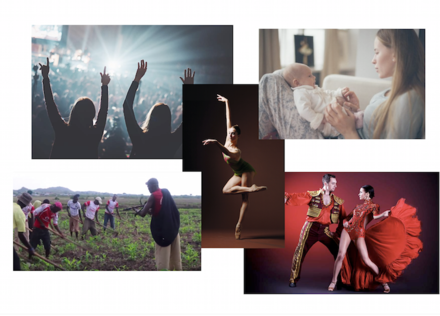 The world over, music is accompanied by movement. Human movement is obviously necessary to produce sounds, but listeners also engage in bodily activity in response to those sounds, whether in the form of dance or more subtle gestures, like tapping one’s foot. However, the question of why this would be the case––a question so simple as to seem naïve––largely remains unanswered. In this talk I will offer one possible explanation based on a perspective drawn from embodied cognition, and also consider its reverse: perhaps it is not so much that we move to music, but that we participate in musical activities in order to structure our movements in a particular way.

Mariusz Kozak joined Columbia University in 2013. His research focuses on the emergence of musical meaning in contemporary art music, the development and cognitive bases of musical experience, and the phenomenology of bodily interactions in musical behavior. In his work, he bridges experimental approaches from embodied cognition with phenomenology and music analysis, in particular using motion-capture technology to study the movements of performers and listeners. His articles have appeared in Music Theory Spectrum and Music Theory Online, among others. He is currently working on a monograph, titled Enacting Musical Time, which examines how listeners' understanding and experience of musical time are shaped by bodily actions and gestures.

Prior to coming to Columbia University he was a postdoctoral scholar at the Indiana University Jacobs School of Music.

As a violinist, Kozak has performed with the Rochester Philharmonic, the New Mexico Symphony Orchestra, the Santa Fe Opera, and the Santa Fe Symphony. After a stint with a Chicago-based country band, he continues to fiddle around in his spare time.