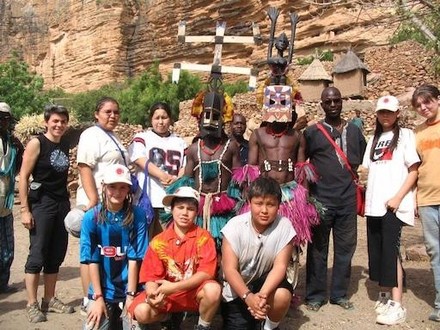 The Center for Ethnomusicology at Columbia University is Pleased to Present a Film Screening of:

Miroir en Face is a documentary film about a trip made by young Cree (Candian First Nations) from James Bay North of Quebec to visit Dogon Country, Mali, Africa. in November, 2005.  The documentary focuses on the encounter between these Quebec Aboriginal youth and the Dogon they meet in Bandiagara.

Biography: Gérald Côté obtained his Ph.D. in ethnomusicology in 1997. He has published several essays including Les 101 Blues du Québec and Processus de création et musique populaire, as well as numerous articles and conferences given in Romania, Brazil, Mexico and Africa. He is the co-director and co-founder of the Acte Sept Ethnomusicological Research Center (CREAS-in french) since 1995, a study center located in Bamako on the traditional practice of Malian music, which led him to spend several stays on the African West Coast. Having been a consultant for many documentaries, he has traveled to more than 40 countries on behalf of various projects celebrating cultural diversity. From 2004 to 2007 he worked on the adaptation of a music program for Cree youths at the James Bay School Board. In 2006, Gérald Côté bring a group of Cree and Inuit students from Chisasibi in Africa for a special encounter with the Malian Dogon. A year after this experience a Canadian producer release a documentary about this exceptional experience.

In 2011, he worked on the design of an international exhibition at the Musée de la civilization in Quebec City on the theme of the musical influence of Africa on the music of the American continents. The success of his latest book Jazz from Inside -for an anthropology of African-American music-, gave him a reissue and was the subject of lectures at the Berklee Colledge of Music in Boston. As a visiting professor at Laval University in Quebec, he continues his research about the link between the social context and de musical aesthetic around the world in a multifactorial and holistic approach.