For the Daughters of Harlem: Working in Sound RECEPTION AND SHOWCASE 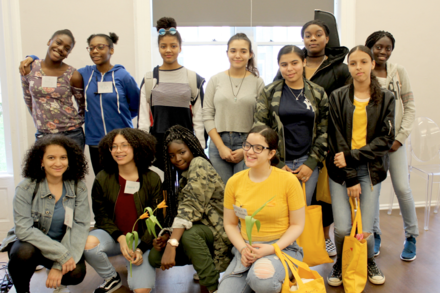 Buell Hall Maison Française
FREE and open to the public

For the Daughters of Harlem: Working in Sound, a two-day music workshop for young women of color from New York public high schools, will culminate in a reception and showcase of students’ musical work, produced under the guidance of workshop leaders Sondra Woodruff, Rachel Devorah, Seth Cluett, and Kamari Carter. As part of the event, musicologist Matthew D. Morrison will engage in conversation with award-winning producer Ebonie Smith about her advocacy for more inclusive spaces in music production and technology.

Ebonie Smith is an award-winning music producer, audio engineer and singer songwriter, as well as founder and president of Gender Amplified, a nonprofit organization that celebrates and supports women and girls in music production. Smith is an alumna of Barnard College, Columbia University, and New York University.

Matthew D. Morrison is Assistant Professor of Music at NYU Tisch School of the Arts, and 2018-2019 Hutchins Fellow, W. E. B. Du Bois Research Institute, Harvard University. His research explores race and performance, and is working on a book titled Blacksound: Making Race and Identity in American Popular Music. Morrison received a PhD in Historical Musicology from Columbia University.

The Daughters initiative is directed by Lucie Vágnerová, Core Lecturer in Music, and Ellie Hisama, Professor of Music.

Any views, findings, conclusions or recommendations expressed by this program do not necessarily represent those of the National Endowment for the Humanities.