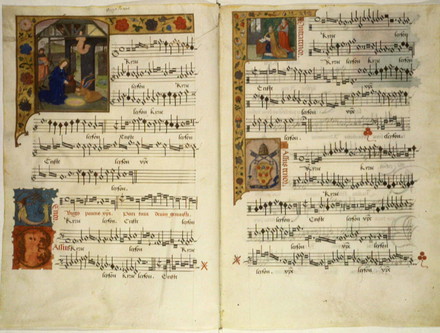 This concert began as a juxtaposition of the Haydn mass and works by Columbia composers.  I commissioned three composers to write four-part (SATB) a cappella works using the Latin motto of Columbia University, “In lumine tuo videbimus lumen” (“In your light we shall see light”). Of course, Haydn and Columbia are further linked in Columbia’s alma mater, Gilbert Oakley Ward’s text setting to Haydn’s Kaiserhymn.  The resulting program reveals several linking threads —Haydn, Columbia, Catholicism, etc.—perhaps encouraging us to ponder how different threads of the past can seem intertwined today in concert. —Sean Parr

Haydn’s Missa in angustiis, “Mass in [Times of] Distress” Or “Nelson” Mass

Following his second trip to London in 1794–95, Haydn returned to Eszterháza and resumed his position as Kapellmeister with the family he had served for decades. His duties under Prince Nikolaus II were not nearly as extensive as they had been under Prince Nikolaus I: Haydn’s main task at court now was to provide a mass each September for the nameday of Princess Maria Hermenegild, the prince’s wife. The six late masses, composed between 1796 and 1802, were the result of this duty.

The Missa in angustiis, the third of the six late masses, was composed in 1798 between July 10 and August 31, and premiered in St. Martin’s Church in Eisenstadt on September 23. The Latin title comes from Haydn himself, and translates as “Mass in [Times of] Distress,” reflecting the anxiety in the empire about the war and the approaching French armies. Although Haydn could not have known it at the time (the news would not reach Vienna until nearly two weeks after Haydn’s completion of the score), in the first days of August Admiral Nelson and the British fleet had intercepted and brilliantly routed the French navy at the Battle of Aboukir in the eastern Mediterranean. (Haydn would later compose a cantata on this subject for Emma Hamilton: the Lines from the Battle of the Nile.) Thus, although the nickname “Nelson” does not originate with the composition of the mass, it could date from September of 1800, when Admiral Nelson and his party visited Prince Esterházy and Haydn in Eisenstadt. The party may have heard a performance of the mass during their visit.

Haydn scores this mass for three trumpets, timpani, strings, and organ, omitting woodwinds. (In 1798, Prince Nikolaus had dismissed his Harmonie, or wind band, to cut down on expenses.) The trumpet and timpani fanfares that open the D Minor Kyrie immediately lend the mass a martial character. The triumphant D Major Gloria includes a central B-flat Major setting of the “Qui tollis” begun by the bass soloist with chant-like interjections from the chorus. The Credo text yields another expansive movement complex, opening with a canon between the two pairs of voices in octaves. The sudden (and thus, sublime) trumpet and timpani fanfares toward the close of the Benedictus recall the Kyrie and stand in distinct contrast to the major-mode calm of this movement in most late eighteenth-century Austrian mass settings. The merry, almost irreverent, Dona nobis pacem in D Major closes the mass with an entreaty for peace.

Like the Missa in angustiis, Haydn’s “Emperor” hymn reflects the political atmosphere in the Holy Roman Empire during what many had come to see as a hopeless war. The hymn, which Haydn composed in the winter of 1796–97 at the request of an imperial official, had an explicitly propagandistic function: to celebrate the emperor, Franz II, and improve morale in the face of heavy losses of territory to the French. First sung in theaters throughout the empire on the emperor’s birthday, February 12, 1797, Haydn also used the hymn as the theme for the variation movement in his String Quartet, Op. 76, No. 3; the melody (with a new text) eventually became the German and Austrian national anthems. In 1902, Gilbert Oakley Ward (Columbia College 1902) wrote a new text for the hymn—“Stand, Columbia!”—and it was adopted as Columbia’s alma mater. —Karen Hiles

This piece is a ninety second messa di voce.  I particularly like Sean’s instruction to the choir to treat the accents throughout as “crystal points of light” gleaming for an instant through the clusters.  All thanks to the members of the Collegium! —Katharine Soper

My piece is based on a slightly altered version of Columbia University's seal (“lumina” instead of “lumen”). I inadvertently substituted the plural for the singular form and noticed the mistake only after the piece had been entirely composed. I decided to keep this variation. By inferring that in the light of God we will reach a plurality of different lights and not only one monolithic wisdom, the altered seal sounded to me more joyful and, ultimately, more inspiring. The music, in fact, ended up reflecting this dualism. The austere sound of empty fifths alludes to the intimate concentration of prayer, while the warmer and expressive passages where the harmony opens up represent the different emotions awakened by the presence of the Holy Spirit. A coda in a calm and reconciled tone brings back the empty fifths, now sounding sweeter than before—tempering the fire in the heart. — Alberto Bosco

I found these words evocative for their depiction of the emergence of light in the reflection between and the sublimation of the divine and the secular.  The piece explores this timbrally in the passage between agitated textures and sustained pitches, consonants and vowel sounds, and non-voiced and voiced utterances. Ideas of reflection and sublimation are also echoed by two parallel strands of pitch material, separated by a tritone, which expand until their domains overlap. — Huck Hodge

Thomas Merton was a Trappist monk (and former Columbia student) who is primarily remembered for his influential writings on Catholicism.  In his poetry, he uses a rich descriptive language to examine and meditate on the objects and ideas that populate his real and his spiritual life, on their significance to both realms and on their relationship with each other and with him.  The three poems in this set are all located within a world of contemplative solitude, both literal and metaphorical: the temporarily becalmed silence of winter just before the warm thaw (unfortunately still appropriate for mid-April 2007); a handful of symbolic objects rejoicing in their solitude; and an allegorical world of stillness and beauty beneath the sea.  In setting these poems, I wanted to keep in mind their intimacy and inward-ness, retaining some of the stasis of these worlds while allowing moments of vivid activity.  I’m very grateful to Sean Parr for programming these pieces, and especially to Brett and Amber for letting me sing with them, which has been an inspiration and a pleasure.  Songs for Nobody was commissioned by the Museum of Biblical Art in 2005. —Katharine Soper