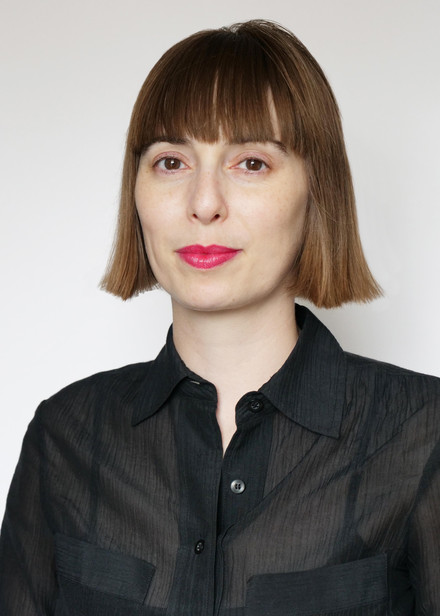 Julie Beth Napolin (Assistant Professor of Digital Humanities, The New School) is a scholar, musician, and radio producer. She has published widely on the history of sound reproduction and its intersections with the history of the novel, film, and art, asking what practices of technological listening can tell us about the politics of form.

Her first monograph, The Fact of Resonance: Modernist Acoustics and Narrative Form, is forthcoming in Spring 2020 in the IDIOM series of Fordham University Press. The book returns to the colonial and technological contexts in which anglophone and francophone narrative and novel theory developed, seeking in resonance an alternative premise for theorizing modernist narrative form. Arguing that narrative and novel theory have been founded on an exclusion of sound, The Fact of Resonance poses a missing counterpart to modernism’s question “who speaks?” in the hidden acoustic questions “who hears?” and “who listens?” The racially and sexually fraught narrative spaces of Joseph Conrad instantiate narrative acoustics. If modernism destabilizes what can be known, then how do modernism’s unstable epistemologies “sound?” The power of modernist narrative acoustics is to create indeterminate spaces where “facts”–of event, location, and identity–disperse, multiply, and resonate across time and space. The book follows the transformations of sound technology and narrative acoustics through the resonances between the work of Conrad and Frantz Fanon, Sigmund Freud, W.E.B. Du Bois, William Faulkner, and Chantal Akerman.

A new book project, “Dialectical Sounds/Missing Images,” is a study of testimony, memorialization, and the imprint of sound on memory in instances where images fail to cohere or appear, or otherwise block political reckoning.  Beginning with Faulkner and Benjamin, it follows modernist acoustics and strategies of listening to what exceeds both narrative and techniques of “showing” from the novel into documentary, social media, digital art, and performance. If we have seen too much, then what kind of monument to unhealed political wounds is erected by aurality?

As a Mellon fellow in the Price Lab for Digital Humanities at the University of Pennsylvania, she is working on a digital project titled “The Sound of Yoknapatawpha: An Acoustic Ecology.” The project maps the fictional and historical sounds of the world of Faulkner, moving between the American South and the Global South to follow the invisible routes of space and memory.

Recent essays include “Elliptical Sound: Audibility and the Space of Reading” in Sounding Modernism, eds. Julian Murphet, Penelope Hone, and Helen Groth (University of Edinburgh Press, 2017). Forthcoming works include “The Expropriated Voice,” in the Faulkner and Slavery volume (University of Mississippi Press), and Lie Back, a polyphonic discussion with sound artist Lawrence Abu Hamdan and a number of scholars, artists, and activists.

Colloquium Abstract:
Searching for a way to describe Heart of Darkness, Joseph Conrad wrote that it was “a sinister resonance” and “continued vibration.” These sound figures are ethnocentric, drawn from his vexed memories of music in the Congo, but they are also generative, demanding that literary theorists take seriously a material substratum of writing and reading. What does it mean to say that a text is a “voice”? Isn’t it a resonance, as the primacy of things’ receptiveness to each other? What makes such resonance “sinister?”

This talk addresses the sinister resonance as a profound challenge to the transcendental signifier that supports modernist theories of language and telecommunication. The sinister resonance opens up a phenomenology of reading and listening, or the subtle sensorial contact that makes literary history and comparative study possible. Conrad’s novel resonates with the writing and listening practices of W.E.B. Du Bois, a contemporary of Conrad who was also confronting a transatlantic nexus of sound, language, and consciousness. But the sinister resonance does not denote a literary or cultural history in the traditional sense. Though it transmits, it does not “communicate”—it cuts and wounds. While Heart of Darkness is a 19th-century sound technology, it is not ancillary to an on-going history of colonial linguistic extraction. That it continues today is laid bare by cell phone technology supply chains.The sinister resonance mars the dream of communication with colonial and sexual violence, such that to return to Conrad is to return to the repressed of colonial sound.