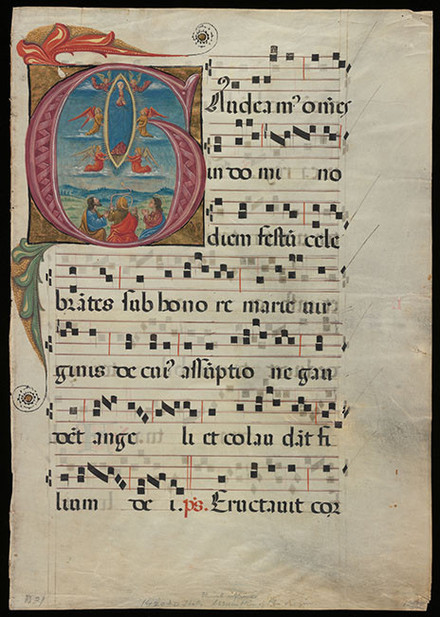 On January 26, 2018, from 10am-12:00 in the Rare Book and Manuscript Library, Columbia University, we will hold first workshop in the series "Liturgical Manuscripts in Person," organized by Susan Boynton (Columbia University) and Diane J. Reilly (Indiana University). In this series, graduate students and other scholars will discuss their research on liturgical manuscripts. Some of the presentations in each workshop will focus on materials physically present in the room.

10-11 AM: Christopher Dylan Herbert, The Juilliard School and William Paterson University: "Voices in the Pennsylvania Wilderness: An Examination of the Music Manuscripts, Music Theory, Compositions, and (Female) Composers of the Eighteenth-Century Ephrata Cloister"
Founded in 1732 by Conrad Beissel, the Ephrata Cloister was a celibate, ascetic, German-speaking, Sabbatarian commune in the wilderness of Pennsylvania. Its residents produced a large corpus of hymns and motets, and also published the third music treatise written in what is today the United States of America. Because Ephrata produced no heirs, its documents were scattered and its traditions were forgotten over the course of the nineteenth century. Although significant strides have been made in recent years to understand Ephrata’s theology, substantial lacunae remain in the study of its music.  Columbia University’s Rare Book Library holds eight unique Ephrata music manuscripts and nine Ephrata printed hymnals, making it a noteworthy repository of Ephrata music materials. The presentation will introduce these various materials, providing a thorough description of the contents and function of the prints and manuscripts. Next, specific attention will be given to the Ephrata music treatise, situating it within the history of music theory. In addition, the presentation will focus on Ephrata’s unorthodox use of a pedagogical tool for composition known as the règle de l’octave. Finally, discussion will be given to the topic of authorship, providing hypotheses for the methodologies of composition, and demonstrating that Ephrata music manuscripts serve as evidence of America’s first female composers.

Biography:
Christopher Dylan Herbert holds a B.A. in Music from Yale University and an M.A. in Middle Eastern Studies from Harvard University. He is currently an assistant professor at William Paterson University where he is head of the voice program. As a vocalist, he performs frequently throughout North America, Europe, Asia, is a two-time GRAMMY® nominee, and is the baritone in the critically acclaimed ensemble New York Polyphony. He has soloed with The San Francisco Symphony and Chamber Music Society of Lincoln Center, International Contemporary Ensemble, and the Choir of Trinity Wall Street, and consistently presents Winterize – an outdoor adaptation of Winterreise with transistor radios. His dissertation is entitled “Voices in the Pennsylvania Wilderness: An Examination of the Music Manuscripts, Music Theory, Compositions, and (Female) Composers of the Eighteenth-Century Ephrata Cloister,” and will be published upon completion of his D.M.A. at The Juilliard School in May 2018. For further information see www.christopherdylanherbert.com and www.newyorkpolyphony.com.

11AM-12pm: Kayla Lunt, Indiana University: Lilly Library, Ricketts Manuscript 44
Ricketts 44 is a group of leaves from a late thirteenth-century breviary held by Indiana University’s Lilly Library. Indications of the manuscript’s original ownership as well as use throughout its life will be highlighted. The process of in-person discovery will be emphasized along with some suggestions for researchers interested in recreating that process outside of the reading room.

Biography:
Kayla Lunt is a PhD student in the Department of Art History at Indiana University, Bloomington, where she also completed her MA. She is interested in the convergence of formal analysis and phenomenological approaches to reading the medieval manuscript. She studies early Gothic manuscripts with a particular interest in hagiography within its manuscript contexts, and recently curated a special exhibition at the Eskenazi Museum of Art entitled “The Medieval Book Unbound.”

Registration is required for this event, and space is limited. To attend this event send a request to slb184 [at] columbia.edu