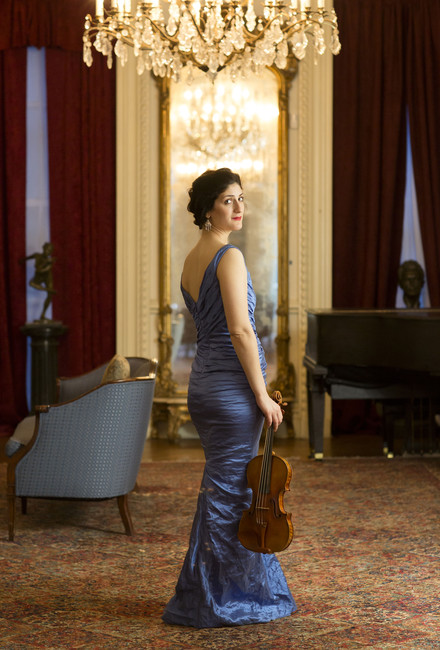 This event is free of charge but requires advance registration. Please RSVP on this page.

Violinist and composer Michelle Ross is unique as both a solo artist and collaborative visionary. In 2013, she had her Carnegie Hall debut with Maestro Harry Bicket, and her European debut as both soloist and conductor, with the Orchestre de Chambre de Paris as part of Play/Direct, in Cite de La Musique.

A noted soloist and chamber musician, Ross is also in demand as guest concertmaster all around the world, recent highlights including appearances with the Mahler Chamber Orchestra throughout Europe, MusicAeterna and Teodor Currentzis in Russia, the Orchestre National du Capitol de Toulouse and the Orchestre d'Auvergne.  Ross is the Artistic Director and Founder of Music in the Mountains, a classical chamber music festival atop Summit Powder Mountain in Eden, Utah.  In 2016 Michelle also launched the inaugural season of Chamber Music at Eleventh Street Arts Gallery in NYC.

As a chamber musician, she has toured extensively with Itzhak Perlman, and also collaborates with Mitsuko Uchida and Dénes Várjon, as well as members of the Juilliard, Guarneri, and Cleveland String Quartets.  Ross was an artist at the Marlboro Music Festival from 2011-2014, and has toured with Musicians from Marlboro since 2012.

As a composer and improviser, Michelle is extremely interested in creating multimedia and collaborative works, and was recently awarded a New Music USA grant for her work with RendezVous. Her work has toured with the Aspen Sante Fe Ballet for three seasons. She has also had premieres in Baryshnikov Arts Center, the Joyce Theater and in Lincoln Center's Beyond the Machine Festival.

Michelle holds a M.M. from the Juilliard School and a B.A. in English and Comparative Literature from Columbia University, where she studied in the Columbia/Juilliard joint degree program.

The recital is inspired by Michelle Ross's Discovering Bach project, in which she performed the solo works of JS Bach at diverse venues throughout New York City. Read about the project on her website.