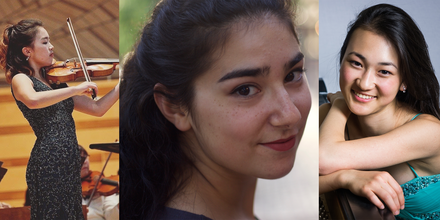 Hana is an avid chamber musician, and attended the Music@Menlo Chamber Music Institute Young Performers Program for three summers. She was also a member of the Sophos Trio in the Young Chamber Musicians Program directed by Susan Bates, with which she won the Galante Competition. In addition, she participated in the San Francisco Conservatory of Music PreCollege Chamber Music Program for three years. She has received master classes and coachings from members of the Lee Trio, the Dover Quartet, the Escher Quartet, the Telegraph Quartet, the St. Lawrence String Quartet, and the Borromeo Quartet. Hana is currently a Computer Engineering major at Columbia University. Prior to college, she studied at the San Francisco Conservatory of Music PreCollege under Heidi Hau’s tutelage.

19-year old violinist, Katherine Woo, made her Kennedy Center solo performance debut at the age of 11 as the grand prize winner of the 2009 INPSS International Youth Praise Festival, where she was named “The Best Performer of 2010.” A few years later, she made her Carnegie Hall solo debut at the age of 15 as a prize winner of the American Protégé International Piano and Strings Competition. After three years of studying at the Juilliard Pre-College program, she currently continues her studies under Mr. Masao Kawasaki in the Columbia-Juilliard Exchange Program.

Recently, Woo was chosen as the 2017 Haydn Concerto Competition at the Aspen Music Festival and School. Also that summer, she participated in the Wu Han Finckel Chamber Music Program. Last year, Woo advanced to the final round in the 2016 Juilliard Concerto Competition and was also invited to perform at the New World Center as a 2016 National YoungArts Finalist. In the summer of 2016, Katherine was invited to perform and tour Europe with the National Youth Orchestra of the United States. Also that summer, she participated in the 2016 Aspen Music Festival and School. Additionally, she was selected as the alternate winner in the 2015 Juilliard Pre-College Concerto Competition, and also performed her own solo recital at The Juilliard School, as well as at Sun City, Hilton Head Island. She was chosen as a 2015 Young Arts Winner as well as finalists of the Markov Young Artists Competition, the PepsiCo National Young Artists Competition and the Queens Symphony Young Soloist Competition.  She has appeared on NPR’s From the Top with Christopher O’ Riley and was invited to participate in the 2014 New York String Orchestra Seminar, resulting in two more performances at Carnegie Hall.

Lucie Ticho, cellist, is a native of Chicago. She is currently pursuing her bachelor’s degree at Columbia University. As a student of the Columbia-Juilliard exchange program, she takes cello lessons with Richard Aaron. Before coming to New York, she studied with Tanya Carey and served as the principal cellist of the Chicago Youth Symphony Orchestra. Lucie has performed as a soloist with the Elgin Symphony, the CYSO and its chamber symphony, and a number of other Chicago area orchestras, and has appeared on NPR’s From The Top and Performance Today. She has been a semifinalist in the Stulberg, Klein, and Johansen International String Competitions. She was also a Youngarts Foundation laureate and a medalist in the Chicago Symphony Orchestra’s Crain Maling Concerto Competition and the Music Teachers National Association (MTNA) Competition.

Lucie has attended numerous music programs, including the Aspen Music Festival, the New York String Orchestra Seminar, the Bowdoin International Music Festival, and the National Youth Orchestra of the United States. She has collaborated with internationally acclaimed artists such as violinist Stefan Jackiw and dancer Charles “Lil Buck” Riley, and she has performed at venues as diverse as Carnegie Hall and NBA stadiums. When she is not playing cello, Lucie enjoys reading, being outdoors, and seeing her cats. She is pursuing a degree in political science at Columbia.

All events are sponsored by Columbia University's Music Performance Program and are free and open to the public.