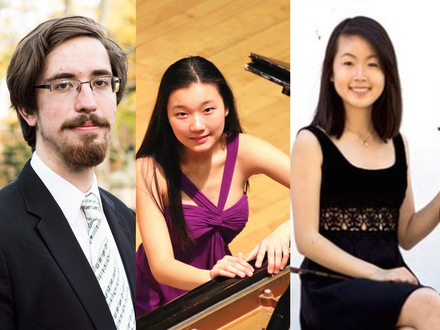 Come join us in the Garden Room at Faculty House, where Students and Music Associates from Columbia University's Music Performance Program will be showcased in an afternoon recital series.

Jennifer Chen is a sophomore at Columbia College majoring in computer science. She has played violin for 11years and currently studies with Stefan Jackiw on scholarship as a recipient of the Dolan Prize. As a native of San Diego, Jennifer has placed in multiple MTAC Concerto Competitions and previously studied with Professor Alice Schoenfeld of USC and Alexander Treger, former concertmaster of the LA Philharmonic. In San Diego, Jennifer founded free music tutoring programs at the local library and organized benefit concerts to raise money for Hands for Honduras and Liberty in North Korea. Jennifer has attended the Idyllwild Arts Summer Chamberfest on full scholarship and has studied at the Aspen Music Festival and School. She was also fortunate enough to be invited to perform at Carnegie Hall as a 1 st place winner of the American Protégé International Concerto Competition.

At Columbia, Jennifer was among a piano trio selected to perform at the MPP’s Carnegie Hall concert,
teaches young kids computer science, and enjoys learning about technology through research and internships. Jennifer hopes to continue pursuing her passions for music and technology during and after college.

David Newtown (CC ’18) is currently a senior at Columbia College studying Earth Science with a Music
concentration. He was taught cello by Kristina Vaska-Haas and Ruth Drummond from kindergarten through
his senior year of high school. He has attended the Shreveport Chamber Music Clinic and DFW-WOW.
David is currently in the Music Performance Program studying under Eliot Bailen. His chamber groups have
won the Carnegie Competition and have performed in Weill Hall and Symphony Space. He also participates
in the Columbia University Orchestra. In addition to his cello playing, David takes voice lessons from Robert
Osborne through Barnard College. At Columbia, he sang in Collegium Musicum (an early music group)
during his first and sophomore years and in the Bach Society throughout all four years. This year, he is the
Choir Manager of the Bach Society.

19 year old pianist Heather Hsun Chang has already performed quite extensively, both as a very young pianist in her native country, Taiwan, and in more recent years, in various cities on both coasts of the United States. Heather is currently a freshman at Columbia University studying music and neuroscience and continuing her piano studies with Concert Pianist Reiko Uchida. She attended the San Francisco Conservatory of Music Pre-College Division as a Hurlbut-Johnson Preparatory scholarship student under Concert Pianist Corey McVicar, and received the Young Artist Certificate, the highest level certificate in the Pre-College Division in 2014. Heather has participated in numerous competitions and was a top prize winner in the Young Pianist’s Beethoven Competition, the ENKOR International Piano Competition, Ross McKee Piano Competition, Pacific Musical Society Competition, the San Francisco Chopin Competition, and the Kawaii Piano Competition, Taiwan Regional. Her musical studies continue in the summer when she attended the Bowdoin International Music Festival studying under Douglas Humpherys (2016); the Southeastern Piano Festival (2016); the Dominican University Chamber Camp (2015); the Morningside Music Bridge Music Festival in Calgary, Canada (2014); and the Walnut Hill Music Festival in Natick, Boston (2012), all with scholarships. In November of 2015, she was interviewed by Palo Alto Weekly in the article “A Passion for Piano”. (http://www.paloaltoonline.com/news/2015/11/13/a-passion- for-piano)

To add on, Heather attended the 2015 YoungArts Week in Miami, Florida as a finalist winner of the National
Foundation for the Advancement of the Arts. Her previous teachers include Concert Pianist Chiao-Han Liao
and Professor Mack McCray.

All events are sponsored by Columbia University's Music Performance Program and are free and open to the public.

For more information about performers or program details, please visit: