Music Representation of an Underprivileged Group: the Case of the Czech Roma 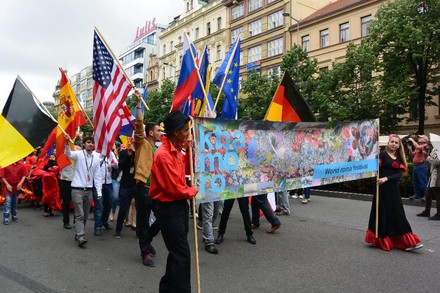 The Center for Ethnomusicology Presents:

Music Representation of an Underprivileged Group:
the Case of the Czech Roma

For information or directions write to: Aaron A. Fox  aaf19 [at] columbia.edu

Abstract: Although the Roma are the most numerous minority in the Czech Republic (ca. 3% of the population) they did not established any mechanism for the selection of political or cultural representatives. In fact, the Roma who reach influential positions negotiate and construct their roles in accordance to who they were elected to represent and those they face. Because of this situation, there is no coherent way of Roma representation through music despite the fact that such a representation is regarded by the public opinion as the most positive aspect of Romani culture which can be used as a marker of collective identity and, at the same time, as a powerful “diplomatic” tool (Lundberg 2010). This talk focuses on two different aspects of Romani musical representations in the Czech Republic: individual and institutional. In the first case, I analyze how two of the most distinguished and visible “Romani” musicians construct their musical styles and, in turn, how various groups consider these styles as Romani. In the second case, the talk focuses on Džemil and Jelena Silajdžič, the managers of the biggest European Romani festival held annually in Prague (Khamoro). I discuss the profound influence that these two managers have on the (re)presentation of Romani music in the Czech Republic, and analyze the role of the Silajdžičs as mediators of the perception of Romani music(s) among the majority, among Roma themselves.

Zuzana Jurková studied ethnology and musicology at the Philosophical Faculty of Charles University and at the music conservatory in Brno. She is the head of the Institute for Ethnomusicology at the Faculty of Humanities of Charles University, focused mainly on the the research of musics of minorities (Voices of the Weak, 2009; Sounds from the Margins, 2013). She concentrates on Romani music (including numerous publications, and an Open Society Fund grant in 1996-8), on the history of Czech ethnomusicology (Ph.D. 1996, a Fulbright scholarship in Bloomington, USA, 1998) and, in recent years, on urban ethnomusicology (Pražské hudební světy 2013; Prague Soundscapes 2014)

Also be aware of these upcoming events at the Center for Ethnomusicology: