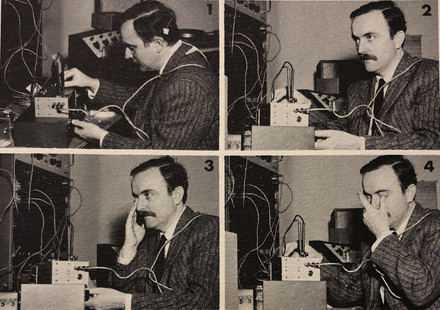 “No Ideas But In Things? Cybernetics and Materiality in Alvin Lucier’s Early Electronic Music”

A recent documentary film about the composer Alvin Lucier borrows its title from William Carlos Williams’s well-known poetic phrase: “No Ideas But In Things.” Much of Lucier’s work over the past fifty years has explored phenomena of resonance, feedback, and sound in material objects, both domestic (tea kettles, living rooms) and scientific (metal wires, the Earth’s Ionosphere, the human brain). Lucier has written extensively about his work, valorizing natural resonance, echo, and sounds that emerge from things through what often appears to be minimal human intervention.

This presentation asks: what other things are needed to sonify the “ideas in things” valorized by Lucier’s early works with electronics in the 1960s? Where do those other things come from? And what does paying attention to those other things do not only for our understanding of Lucier’s work, but for the larger field of experimental music? Drawing on archival research, this presentation explores Lucier’s early sketches, notes, and correspondence to triangulate his work—which used technologies made available to him through the United States Air Force and the Office of Naval Research—within the fields of American experimental composition, the military-industrial complex, and cybernetics and information theory. Against a Kittlerian reading of the military origins of these technologies as tied to an ontologically enervating martial sensibility, this paper suggests that Lucier’s relationship to science and technology was not one of reflection, but rather of diffraction: the creation of underdetermined sites of possibility for experimenting with nature and human nature. In this reading—which indeed diverges from the composer’s own framing of his early work—these practices are celebrated as both technoscientific fantasy and critique, connecting (and complicating) nature and culture in radically new ways.

Ted Gordon is a music scholar and musician whose work lies at the nexus of experimental music studies, critical organology, and science & technology studies. He earned a PhD in the History and Theory of Music for the University of Chicago in 2018, and is currently a Mellon Postdoctoral Teaching Fellow in the Department of Music at Columbia University.

His current book project, The Composer’s Black Box: Cybernetics & Instrumentality in Post-War American Music critically explores new aesthetic, social, and technical imaginaries produced through the embrace of cybernetics and information theory by postwar American experimentalists—and the consequences of those imaginaries for auditory culture, technologies, and politics. Research for his book stems from his dissertation, “Bay Area Experimentalism: Music & Technology in the Long 1960s,” which was a Leonardo Abstracts Service Top-Ranked Thesis in 2018. His research has been supported by the New York Public Library, and his writing has been published by Current Musicology, Portable Gray, Cultural Anthropology, the American Musicological Society’s Musicology Now! blog, and the Library of Congress. His forthcoming chapter on the early electronic music of Pauline Oliveros will be published in the edited volume Performing Indeterminacy (Cambridge University Press). In 2019, he helped Seth Cluett prepare the exhibition “Sounding Circuits: Audible Histories” at the New York Public Library for the Performing Arts. In addition to international scholarly conferences, he has also given public talks about his research at the Indexical performance series in Santa Cruz, California, the Synthesizer Library Prague, and Ableton AG.

As an improviser, Ted performs with the viola and the Buchla Music Easel.