The Iraqi Maqam: From Tradition to Innovation and Survival 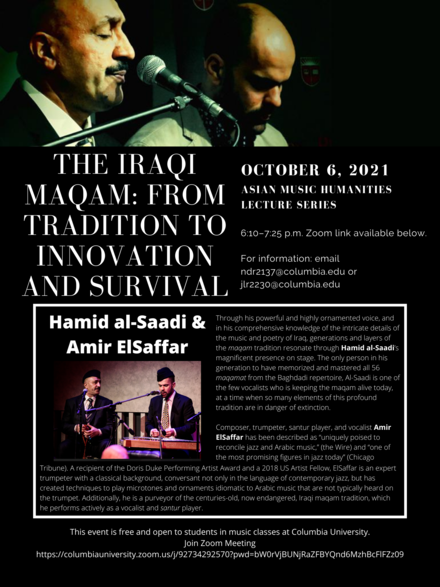 The Asian Music Humanities Lecture series presents "The Iraqi Maqam: From Tradition to Innovation and Survival" by Hamid al-Saadi and Amir ElSaffar. This lecture is scheduled for WEDNESDAY, OCTOBER 6, 2021, from 6:10–7:25 PM on Zoom.

This event is free and open to students in music classes at Columbia University. For more information, email ndr2137 [at] columbia.edu and jlr2230 [at] columbia.edu. The Zoom link can be found at the bottom of the page.

Through his powerful and highly ornamented voice, and in his comprehensive knowledge of the intricate details of the music and poetry of Iraq, generations and layers of the maqam tradition resonate through Hamid al-Saadi’s magnificent presence on stage. The only person in his generation to have memorized and mastered all 56 maqamat from the Baghdadi repertoire, Al-Saadi is one of the few vocalists who is keeping the maqam alive today, at a time when so many elements of this profound tradition are in danger of extinction.

Born in Iraq in 1958, Hamid Al-Saadi’s artistic, musical and scholarly journey with the Iraqi maqam began from childhood, inspired by his avid love of the Iraqi and Baghdadi culture, the Arabic language, music and poetry. He studied, practiced, and performed the maqam until he became one of the more renowned and highly acclaimed musicians and scholars in this subject. He learned the art of singing and performing the Iraqi maqam from the legendary Yusuf Omar (1918-1987), who pronounced Al-Saadi as his successor. Muhammed Al-Gubbenchi (1901-1989) who taught Omar and was probably the most influential maqam reciter in history, said that he considered Al-Saadi to be the “ideal link to pass on the maqam to future generations.”

Al-Saadi immigrated to Great Britain in 1999, where he lived and was active for six years as a maqam scholar, singer, artist and writer, and returned to Baghdad in 2004.  He authored a book on the maqam entitled,”al-maqam wo buhoor al-angham” is one of the most comprehensive texts on the Iraqi Maqam and its poetry that has ever been published.

He is now in the United States on an Artist Protection Fund Fellowship, with one year teaching positions at Rutgers and Sarah Lawrence College. He has also performed at Duke University, The Wexner in Columbus, the Kennedy Center Jazz Club, Old Town School of Folk Music, Princeton University, the Freer and Sackler Museum, the Metropolitan Museum, David Rubenstein Atrium at Lincoln Center, in addition to a number of lectures and private performances at Rutgers, Princeton, and other Universities.

Composer, trumpeter, santur player, and vocalist Amir ElSaffar has been described as “uniquely poised to reconcile jazz and Arabic music,” (the Wire) and “one of the most promising figures in jazz today” (Chicago Tribune). A recipient of the Doris Duke Performing Artist Award and a 2018 US Artist Fellow, ElSaffar is an expert trumpeter with a classical background, conversant not only in the language of contemporary jazz, but has created techniques to play microtones and ornaments idiomatic to Arabic music that are not typically heard on the trumpet. Additionally, he is a purveyor of the centuries old, now endangered, Iraqi maqam tradition, which he performs actively as a vocalist and santur player. As a composer, ElSaffar has used the subtle microtones found in Iraqi maqam music to create an innovative approach to harmony and melody, and has received commissions to compose for large and small jazz ensembles, traditional Middle Eastern ensembles, chamber orchestras, string quartets, and contemporary music ensembles, as well as dance troupes. Recent projects have included a Raga-Maqam ensemble, recordings, and performance series, and works combining his jazz- and maqam-based repertory with Tunisian trans-Saharan stambeli traditions and flamenco.

The Iraqi Maqam: From Tradition to Innovation and Survival Poster