The Singing Slave: Race, Place, and Voice at the Medici Court in the Primo Seicento 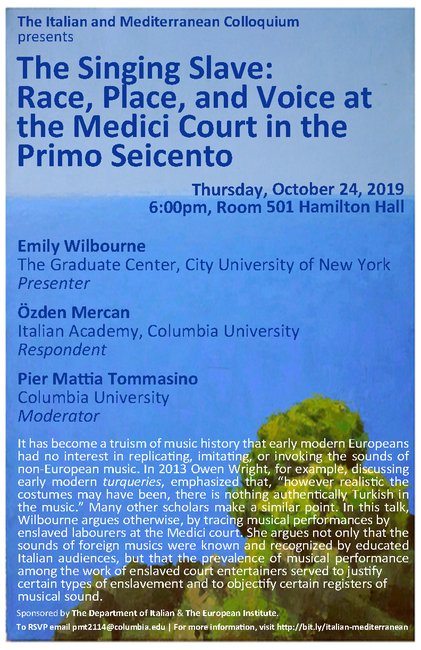 THE SINGING SLAVE: RACE, PLACE, AND VOICE AT THE MEDICI COURT IN THE PRIMO SEICENTO

It has become a truism of music history that early modern Europeans had no interest in replicating, imitating, or invoking the sounds of non-European music. In 2013 Owen Wright, for example, discussing early modern turqueries, emphasized that, “however realistic the costumes may have been, there is nothing authentically Turkish in the music.” Many other scholars make a similar point. In this paper I argue otherwise, by tracing musical performances by enslaved labourers at the Medici court. I argue not only that the sounds of foreign musics were known and recognized by educated Italian audiences, but that the prevalence of musical performance among the work of enslaved court entertainers served to justify certain types of enslavement and to objectify certain registers of musical sound.

To RSVP, please send Pier Mattia Tommasino an email at pmt2114 [at] columbia.edu
For more information, visit this website.