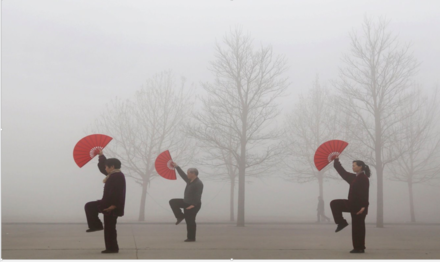 Ensemble Recherche (Freiburg) will perform a concert of the music of Wang Lu, Assistant Professor of Composition at Brown University and alumna of the doctoral program in Composition at Columbia. The concert will feature two recent works that engage with the sound world of contemporary China -- Urban Inventory (2015) for small ensemble and Unbreathable Colors (2017) for violin and projections -- as well as a world première and Fred Lerdahl's Marches. After the performance, Wang Lu will take part in a discussion with Xiaolu Guo (Fellow at the Institute for Ideas and Imagination).

Composer and pianist Wang Lu was born in Xi’an, the ancient capital of China. Raised in a musical family with strong Chinese opera and folk music traditions, her works reflect a very natural identification with those influences, through the prism of contemporary instrumental techniques and new sonic possibilities. She is a 2019 Berlin Prize Fellow at the American Academy in Berlin,, a 2014 Guggenheim Fellow, and won the first prize at Le Nouvel Ensemble Moderne’s Young Composers Forum in 2010. She was selected for a Tremplin commission by IRCAM/Ensemble Intercontemporain in 2010, as well as a commission to write for the Ensemble Modern in 2012, and has also received two ASCAP Morton Gould awards. Her orchestral work Scenes from the Bosco Sacro was selected for the 2014 New York Philharmonic Biennial New Music Readings. Wang Lu's first solo recording was released in 2018 to considerable critical acclaim, including praise from Alex Ross in the The New Yorker and in Diapason magazine.

Founded in 1985 and based in Freiburg, Germany, ensemble recherche is one of the leading contemporary music ensembles in the world, focusing on music of the 20th and 21st century, and premièring over 500 works since its inception. It is particularly renowned as Europe’s leading ensemble for the performance of challenging, experimental new chamber music. Ensemble recherche is represented on dozens of recordings and frequently collaborates with the world’s great living composers.

This event is made possible through the New Music Fund, a program of FACE Foundation, with generous funding from the Cultural Services of the French Embassy in the United States, Florence Gould Foundation, Fondation CHANEL, French Ministry of Culture, Institut français-Paris, and SACEM (Société des Auteurs, Compositeurs et Editeurs de Musique).