Works for Cello and Piano by Hovhaness, Barber, and Part 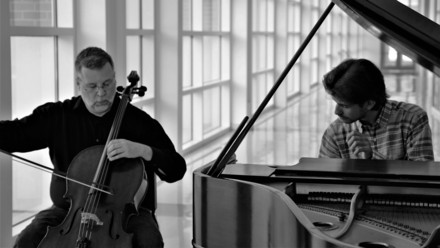 Following the release of their latest recording, cellist Eric Edberg and pianist John Kamfonas present a program that includes two sonatas by American composers Alan Hovhaness (1911-2000)  and Samuel Barber (1910-1981). Despite their divergent styles, these two composers chose to forge their own musical paths that veered away from the conscious cultivation of an “American” contemporary musical identity occupied by their contemporaries Aaron Copland, Leonard Bernstein, and Charles Ives among others.

Hovhaness’ exposure to the vocal music of Armenian priest and composer Komitas Vartabed inspired his lifelong travels throughout Asia where he constantly learned and appropriated traditional music styles of Armenia, India, Japan, and Korea. In Barber’s case, his early exposure to the operatic tradition through his aunt, the celebrated contralto Louise Homer, and through travels to Europe produced an affinity for lyrical melodies that would manifest themselves in many of his compositions. This shared early love for vocal music further unites these composers as it inspired a poignant lyricism present within these sonatas and throughout their musical outputs. Complementing these works, the program features other pieces by Hovhaness, Arvo Pärt, as well as duo improvisations inspired by this music.

Classical and improvising cellist Eric Edberg has been heralded by the Washington Post for an “excellent solo performance,” and by the Appleton Post-Crescent for playing that was "both faultless and effortless, a pleasure to observe and enjoy.” A concert organizer, workshop leader, and drum circle facilitator committed to enlivening and connecting people through music, he is the founder and artistic director of the Greencastle (Indiana) Summer Music Festival, which has “brought the community together with friends making music for friends” since 2005. He has performed internationally as a soloist and chamber musician with artists including the Grammy-winning pianist/composer Fernando Otero; the pianists Claude Cymerman, Taka Kigawa, and May Phang; cellist David Darling; and flutist Paul Horn. Dedicated to music as a healing force and to bringing classical music “everywhere,” Edberg has played in nursing homes, schools, hospitals, prisons and even the New York City subways. At DePauw University, where he is the Cassel Grubb Professor of Music, he coaches of one of the country’s few non-jazz improvisation ensembles and teaches courses on music entrepreneurship and innovative concert presentation.  Edberg attended high school at the North Carolina School of the Arts, and also studied at Juilliard, Peabody, SUNY Stony Brook, and Florida State University. His cello teachers included Denis Brott, Bernard Greenhouse, Gary Hoffman, Stephen Kates, and Leonard Rose.

Embracing his penchant for improvisation alongside his passion for the classical and contemporary repertoire, Greek-American pianist John Kamfonas has given performances around the world, from New York to India, Paris to Beijing, which have been described as possessing "a grandeur that lifted the music into the sublime...and a delicacy that took one's breath away." (National Herald, New York) As one of few improvising classical pianists, Mr. Kamfonas performs music ranging from Bach and Beethoven to Debussy and Barber interweaved among spontaneously conceived improvisations. He gave his New York debut at Merkin Hall in 2012 and has performed in numerous summer festivals including the Atlantic Music Festival (Maine), Aspen Music Festival, Beijing International Music Festival and Academy, and the Greencastle Summer music festival (Indiana). Other solo concerts include performances at Steinway Hall (New York), Baruch Performing Arts Center (New York), and most recently at Salle Cortot (Paris) in 2017.  As a devoted proponent of contemporary music, Mr. Kamfonas has performed and worked with world renowned composers of today including George Tsontakis, Eric Ewazen, Victor Kioulaphides, and Alexandros Markeas among others. He also collaborated alongside various members of Yo-Yo Ma’s Silk Road Ensemble for a series of concerts at DePauw University during the summer of 2017.  Mr. Kamfonas currently resides in Paris as a resident musician and Harriet Hale Woolley Scholar at the Fondation des Etats-Unis, the site of a recent solo recital part of which was broadcast nationally on France’s TV channel TF1 in 2016. He holds degrees from Columbia University, Manhattan School of Music, and the Ecole Normale de Musique in Paris having studied under Phillip Kawin, Jean-David Coen, Marian Rybicki, and Jean Fassina.

This concert is free of charge and open to the public; registration on the Reid Hall website.