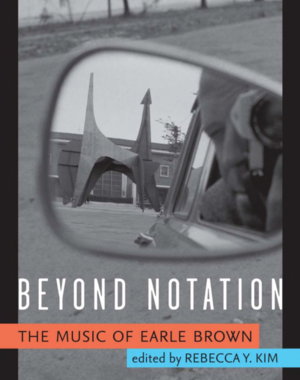 Beyond Notation: The Music of Earle Brown

Earle Brown (1926–2002) was a crucial part of a group of experimental composers known as the New York School, and his music intersects in fascinating ways with that of his colleagues John Cage, Morton Feldman, and Christian Wolff.  This book seeks to expand our view of Brown’s work by exploring his practices as a composer and draughtsman through a selection of works composed in the United States and Europe, which included a seminal collaboration with sculptor Alexander Calder.  These essays detail Brown’s compositional methods in historical context: not only his influential experiments with open form composition and graphic notation, but his interest in performance, mixed media, jazz, the Schillinger system, and his engagement with the European avant-garde.  The volume also includes never before published essays by Brown that shed new light on his relationships with colleagues and the ideas that shaped his work, in addition to several color photographs of Brown’s paintings.

“One of the best [multi-authored books] I’ve seen. . . . It makes a huge contribution. Earle Brown has long been neglected, and it’s nice to see his work receiving the attention it deserves.”
—Amy Beal, University of California-Santa Cruz

"…an indispensable book about a composer who was beyond categorization. The essays, by prominent musicologists, composers, and performers, offer surprises and revelations galore about Earle Brown's music and his multi-faceted life as a composer, conductor, record producer, and visual artist…Kudos to Rebecca Kim and the authors for a foundational book!”
—Anne C. Shreffler, Harvard University

Rebecca Y. Kim is a musicologist and lives in New York City.