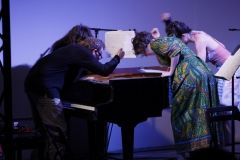 Ensemble Pamplemousse: This is the Uplifting Part, on March 15, 2016,  at 7 pm, featured the composer/performer collective Ensemble Pamplemousse in a program of experimental new music by the collective’s members, including prominent Columbia DMA alumni Natacha Diels and Bryan Jacobs. Diels, now Assistant Professor of Composition at UC San Diego, founded the Ensemble in New York in 2003. Each of the Pamplemousse members specializes in a unique aspect of composition, from micro-detailed instrumental writing to experimental theatre with electronics to electro-mechanical musical robotics. Their performances combine weirdness and beauty with pop culture and classical virtuosity. After the concert, the musicians discussed their work in conversation with Susan Boynton (Chair, Department of Music and organizer of the series).