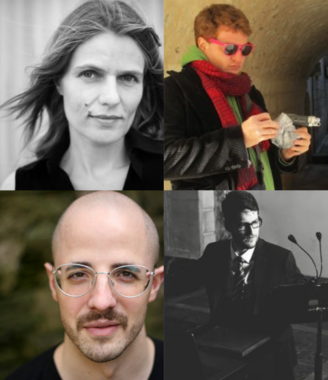 Read more here about the 2019 Fellows.

Guggenheim Fellowships are intended for individuals who have already demonstrated exceptional capacity for productive scholarship or exceptional creative ability in the arts.

The Foundation receives approximately 3,000 applications each year. Although no one who applies is guaranteed success in the competition, there is no prescreening: all applications are reviewed. Approximately 175 Fellowships are awarded each year."

Sam Pluta is a Chicago-based composer, laptop improviser, electronics performer, and sound artist. Though his work has a wide breadth, his central focus is on the laptop as a performance instrument capable of sharing the stage with groups ranging from new music ensembles to world-class improvisers. By creating unique interactions of electronics, instruments, and sonic spaces, Pluta's vibrant musical universe fuses the traditionally separate sound worlds of acoustic instruments and electronics, creating sonic spaces which envelop the audience and resulting in a music focused on visceral interaction of instrumental performers with reactive computerized sound worlds.

Sam is the Technical Director for the Wet Ink Ensemble, a group for whom he is a member composer as well as principal electronics performer. As a performer of chamber music with Wet Ink and other groups, in addition to his own works, Sam has performed and premiered works by Peter Ablinger, Karlheinz Stockhausen, Katharina Rosenberger, George Lewis, Ben Hackbarth, Alvin Lucier, Chiyoko Szlavnics, Alex Mincek, Kate Soper, and Eric Wubbels among others.

As an improviser, Sam has collaborated with some of the finest creative musicians in the world, including Peter Evans, Evan Parker, Ikue Mori, Craig Taborn, Ingrid Laubrock, Anne La Berge, and George Lewis. Sam is a member of multiple improvisation-based ensembles, the jazz influenced Peter Evans Ensemble, the free improvisation-based Rocket Science (with Evan Parker, Craig Taborn and Peter Evans), the analog synth and laptop duo exclusiveOr (with Jeff Snyder), and his longstanding duo with Peter Evans. Sam has also performed with the Evan Parker Electro-Acoustic Ensemble. With these various groups he has toured Europe and America and performed at major festivals and venues, such as the Lucerne Festival in Switzerland, the Moers and Donaueshingen Festivals in Germany, Bimhuis in Amsterdam, and The Vortex in London.

Dr Pluta studied composition and electronic music at Columbia University, where he received his DMA in 2012. He received Masters degrees from the University of Birmingham in the UK and the University of Texas at Austin, and completed his undergraduate work at Santa Clara University. His principal teachers include George Lewis, Brad Garton, Tristan Murail, Fabien Levy, Scott Wilson, Jonty Harrison, Russell Pinkston, Lynn Shurtleff, and Bruce Pennycook.

Sam is Assistant Professor of Music and in the College at the University of Chicago. His is director of the CHIME Studio and co-director, with Augusta Read Thomas and Anthony Cheung, of Grossman Ensemble, the University's new music ensemble in the Chicago Center for Contemporary Composition. From 2011-15 he directed the Electronic Music Studio at Manhattan School of Music, and has taught at Columbia University and Bennington College. For 16 years he taught composition, musicianship, electronic music, and an assortment of specialty courses at the Walden School, where he also served as Director of Electronic Music and Academic Dean.

Matthew Ricketts (b. 1986) is a Canadian composer based in NYC. He earned his undergraduate degree at McGill University's Schulich School of Music (Honours Composition, Theory), studying with Chris Paul Harman, Brian Cherney and John Rea. In 2017, he completed his DMA in Composition at Columbia, where he studied with George Lewis and Fred Lerdahl. He is a Core Lecturer in Music Humanities at Columbia.

Katharina Rosenberger, born in Zurich, holds a Doctor of Musical Arts in Composition from Columbia University, under the mentorship of Tristan Murail. Katharina holds the position of Associate Professor in Composition at the Department of Music, University of California, San Diego.Much of her work manifests in a transdisciplinary context and is bound to confront traditional performance practice in terms of how sound is produced, heard and seen. Her compositions, installations and interdisciplinary music theatre projects have been featured at festivals such as the Weimarer Fruhlingstage, KunstFestSpiele Herrenhausen, Hanover, Festival Archipel, Festival La Batie, Geneva, Zurcher Theaterpsektakel, Journees Contemporaine, Basel, Festival Les Musiques, Marseille, Festival Bernaola, Victoria, Spain, New Media Art, Yerevan, Spark Festival of Electronic Music and Art, Minneapolis, the Shanghai New Music Week, the Shanghai International Electro-Acoustic Music Festival, and the October Contemporary in Hong Kong.Katharina's installation work VIVA VOCE and Room V have been awarded with the "Mediaprojects Award"/ Sitemapping of the Swiss Federal Agency (OFC), Berne. She is a past recipient of the Hellman Fellowship, San Francisco, the Sony Scholar Award, and the Ernst von Siemens Musikstiftung Commission for her composition Gesang an das noch namenlose Land. Her portrait CD TEXTUREN with the Wet Ink Ensemble, released on HatHut Records, has been awarded the prestigious Copland Recording Grant and was selected for the Preis der Deutschen Schallplattenkritik, Bestenliste_4, 2012.Katharina is the recipient of the Reid Hall and Camargo Foundation Fellowships for 2006/07, the 2007 Pro Helvetia composition commission and in 2006 the Mediaprojects Award/Projekt Sitemapping of the Swiss Federal Agency (OFC). She has won various composition prizes in London, New York and Switzerland. In 2005 Katharina Rosenberger was composer in residence with the Orchestre de Nimes, Nimes, France

Christopher completed his doctorate in 2017 at Columbia University, where he studied with Tristan Murail, Georg Friedrich Haas, Fred Lerdahl, and George Lewis.

Christopher was the winner of the 2016 Luciano Berio Rome Prize in Composition, as well as the 2007 Gaudeamus Prize, the first American in over 30 years to win the international young composers’ award. Other recent honors include an award from the American Academy of Arts and Letters (2015), a nomination for a British Composers Award (2014), and a grant from the French-American Cultural Exchange (FACE) towards a new piece for ICE and Ensemble L’Itinéraire. He has also won the Julius F. Ježek Prize (2013), three Morton Gould Young Composers Awards from ASCAP (2005, 2006, and the Leo Kaplan Award in 2009), and a BMI Student Composer Award (2006). His scores have been performed by ICTUS, Ensemble Modern, the Nouvel Ensemble Moderne, Nieuw Ensemble, Asko Ensemble, Ensemble L’Itinéraire, Ensemble Orchestral Contemporain, Ensemble Mosaik, Talea Ensemble, Argento Ensemble, Wet Ink, Earplay, Yarn/Wire, Atlas Ensemble, pianists Sergey Schepkin and Marilyn Nonken, and the American Composers Orchestra.