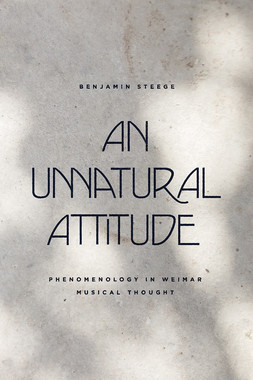 Benjamin Steege, associate professor of music, has just published his second book, An Unnatural Attitude: Phenomenology in Weimar Musical Thought. The book is available from University of Chicago Press.

An Unnatural Attitude traces a style of musical thought that coalesced in the intellectual milieu of the Weimar Republic—a phenomenological style that sought to renew contact with music as a worldly circumstance. Deeply critical of the influence of naturalism in aesthetics and ethics, proponents of this new style argued for the description of music as something accessible neither through introspection nor through experimental research, but rather in an attitude of outward, open orientation toward the world. With this approach, music acquires meaning in particular when the act of listening is understood to be shared with others.

Benjamin Steege interprets this discourse as the response of a young, post–World War I generation amid a virtually uninterrupted experience of war, actual or imminent—a cohort for whom disenchantment with scientific achievement was to be answered by reasserting the value of imaginative thought. Steege draws on a wide range of published and unpublished texts from music theory, pedagogy, criticism, and philosophy of music, some of which appear for the first time in English translation in the book’s appendixes. An Unnatural Attitude considers the question: What are we thinking about when we think about music in non-naturalistic terms?

“In these pages Benjamin Steege recovers, at the very margins of the musical sciences, and against all the odds, a Heideggerian moment, the reverberations of which he traces from the 1920s until they all but fade from hearing three decades later. In the depth and breadth of its synthesis, An Unnatural Attitude provides a model for what it means to write imaginatively about music and conceptual thought.” ~Brian Hyer, University of Wisconsin–Madison

“Between the hard-edged Platonism of musical form and the reduction of musical experience to mere psychological effect, an intricate and reflective style of musical thought emerged in Weimar Germany that was influenced by Edmund Husserl’s novel method of phenomenology. Steege’s deep dive into these forgotten figures—supported by forays into political history, textured close readings, and complete translations of primary texts—is a philosophical feast. It illuminates a complicated strain of European music theory embroiled in evolving debates about musical ontology, cultural difference, and social change.” ~Michael Gallope, author of Deep Refrains: Music, Philosophy, and the Ineffable