"Celia Cruz at the Apollo" 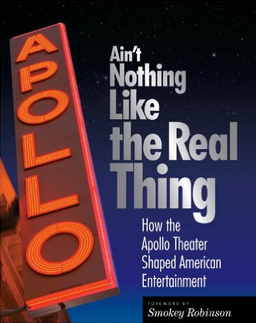 Ain't Nothing Like the Real Thing: How the Apollo Theater Shaped American Entertainment celebrates the seventy-five year history of the Apollo Theater, Harlem's landmark performing arts space and the iconic showplace for the best in jazz, blues, dance, comedy, gospel, R & B, hip-hop, and more since it opened its doors in 1934. This beautifully illustrated book is the companion volume to an exhibition of the same name, organized by the Smithsonian's National Museum of African American History and Culture in collaboration with the Apollo Theater Foundation. It offers a sweeping panorama of American cultural achievement from the Harlem Renaissance to the present through the compelling story of a single institution.

Ain't Nothing Like the Real Thing brings together a diverse group of twenty-four writers to discuss the theater's history and its intersection with larger social and political issues within Harlem and the nation. Featuring more than 300 photographs, this volume brings to life the groundbreaking entertainers in music, dance, and comedy—Duke Ellington, Louis Armstrong, Ella Fitzgerald, Billie Holiday, Smokey Robinson, Aretha Franklin, The Supremes, James Brown, Moms Mabley, Redd Foxx, Honi Coles, and Savion Glover, to name a few—who made the Apollo the icon that it is today. The Apollo Theater has been the setting for soaring achievement and creativity in the face of enormous challenges. In telling this truly American story, Ain't Nothing Like the Real Thing is a celebration of the lasting contributions of African Americans to the nation's cultural life.