Shaping a Monastic Identity: Liturgy and History at the Imperial Abbey of Farfa, 1000-1125 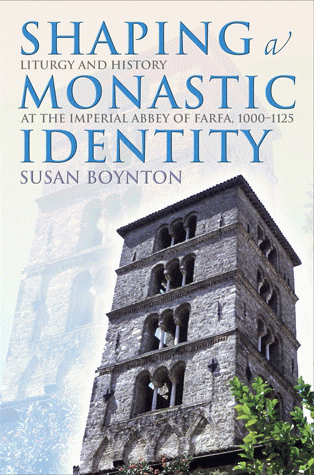 During the eleventh and early twelfth centuries, the imperial abbey of Farfa was one of the most powerful institutions on the Italian peninsula. In this period many of the lands of central Italy fell under its sway, and it enjoyed the protection of the emperor until the 1120s, when it passed gradually into the control of the papacy. At the same time, the monastery was an influential religious center, and the monks of Farfa filled their days with the celebration of the liturgy through prayers, processions, sermons, chants, and hymns.

Susan Boynton, a historian of medieval music, addresses several of the major themes of present-day medieval historiography through a close study of the liturgical practices of the abbey of Farfa. Boynton's findings are a striking demonstration of the local nature of liturgical practices in the centuries before church ritual was controlled and codified by the papacy. Boynton shows that the liturgy was highly flexible, continually adapting to the monastery's changing circumstances. The monks regularly modified traditional forms to reflect new realities, often in the service of Farfa's power and prestige. Equally fascinating is Boynton's examination of the process by which Farfa, like other monasteries, cathedral chapters, and royal houses, constantly rewrote its history—particularly the stories of its founding—as part of the continuous negotiation of power that was central to medieval politics and culture.