The Comedians of the King: Opéra-Comique and the Bourbon Monarchy on the Eve of Revolution 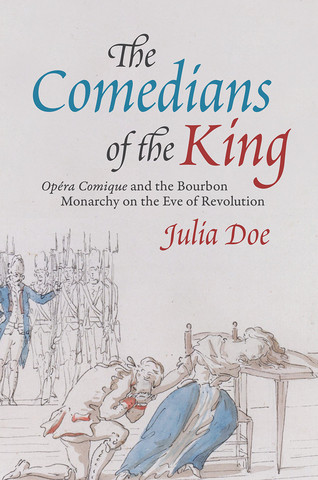 Julia Doe has published a new monograph, The Comedians of the King: Opéra-Comique and the Bourbon Monarchy on the Eve of Revolution. The book is available through the University of Chicago Press.

Lyric theater in ancien régime France was an eminently political art, tied to the demands of court spectacle. Tragic opera (tragédie lyrique) was invented under the auspices of monarchy, and functioned from its start as an embodiment of Bourbon prestige. While historians have long privileged the popular origins of French dialogue opera (opéra comique), this genre, too, had close links to the Crown. In 1762 government authorities incorporated the fairground players that invented the form into a struggling royal troupe, the Comédie-Italienne, thereby consolidating a new venue where national music might be debated and defined. The Comedians of the King investigates the impact of Bourbon patronage on the development of opéra comique in the turbulent pre-revolutionary years. Drawing on extensive new musical and archival evidence, the book presents the history of this understudied lyric genre and unpacks the material structures that supported its rapid evolution at the Comédie-Italienne. This project also, critically, interrogates the political implications of such organizational and stylistic shifts. The comic theater alternately reinforced and undercut the monarchy’s carefully cultivated public image—a negotiation that became especially fraught after the accession of the music-loving queen, Marie Antoinette. In essence, The Comedians of the King examines the aesthetic, institutional, and political tensions that arose when a genre with popular roots was folded into the Bourbon propaganda machine, and when a collection of actors trained at the Parisian fairs became official representatives of the sovereign, or comédiens ordinaires du roi.

“The richness of the book’s vision is remarkable: its elegant syntheses offer a multiple picture of a key operatic genre from its modern formation to mature survival in the age of Wagner. Musical theater studies have needed something like this for a generation now, and Doe has written a persuasive and pleasurable account of the underlying tensions between a ‘national genre’ and the ebb and flow of national politics.” ~David Charlton, Royal Holloway, University of London

“Skillfully combining detailed study of a wide range of works with institutional history and royal patronage, The Comedians of the King will transform our understanding of a key chapter in the history of lyric theater. A noteworthy feature of Doe’s work is her ability to weave the political dimension of her narrative with institutional and stylistic developments in opéra comique. Meticulously researched and persuasively argued, this major study is essential reading.” ~Mark Darlow, University of Cambridge