The Voice of the Rural: Music, Poetry, and Masculinity among Migrant Moroccan Men in Umbria 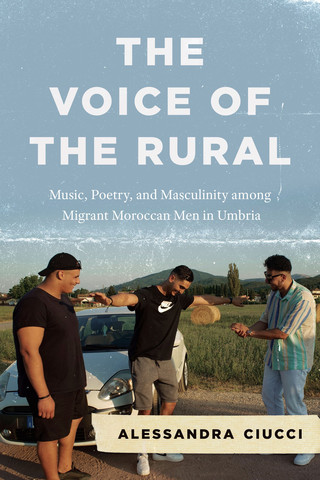 Alessandra Ciucci, assistant professor of music, has published a new monograph The Voice of the Rural: Music, Poetry, and Masculinity among Migrant Moroccan Men in Umbria. The book is available through the University of Chicago Press.

Umbria is known to most Americans for its picturesque rolling hills and medieval villages, but to the many migrant Moroccan men who travel there, Umbria is better known for the tobacco fields, construction sites, small industries, and the outdoor weekly markets where they work. Marginalized and far from their homes, these men turn to Moroccan traditions of music and poetry that evoke the countryside they have left— l-’arubiya, or the rural. In this book, Alessandra Ciucci takes us inside the lives of Moroccan workers, unpacking the way they share a particular musical style of the rural to create a sense of home and belonging in a foreign and inhospitable nation. Along the way, she uncovers how this culture of belonging is not just the product of the struggles of migration, but also tied to the reclamation of a noble and virtuous masculine identity that is inaccessible to Moroccan migrants in Italy.

The Voice of the Rural allows us to understand the contemporary experiences of migrant Moroccan men by examining the imagined relationship to the rural through sound, shedding new light on the urgent issues of migration and belonging.

“This is a fascinating and entirely original piece of work. I know of no work in the field that deals in such depth with how critically important music from the home country is to the lives of migrant workers from the Middle East. Ciucci offers us a detailed and fascinating investigation of the multiple ways in which this musical tradition carries meaning for these migrants.” ~ Ted Swedenburg, author of Memories of Revolt: The 1936-39 Rebellion and the Palestinian National Past

“Voicing the Rural is more than a book about North African migration to Europe. With one foot firmly in the vast, phosphate-rich plains region of central Morocco and the other planted in the “urbanized countryside” of central Italy, Alessandra Ciucci vividly explores how Moroccan migrant men use earthy fragments of sung colloquial poetry to open paths between the rural lives they have left in North Africa and the other kinds of rural lives they are creating in Europe.” ~ Jonathan Glasser, author of The Lost Paradise: Andalusi Music in Urban North Africa