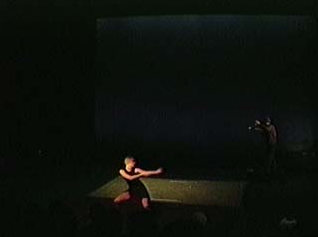 worlds within was the result of a six month collaboration between myself, choreographer jocelyn berry and six dancers. i designed and built a number of interactive sound devices for the dancers to wear, and together we created environments in which they could perform.

worlds within was a work in three parts, informally titled: lights, feedback and heartbeats.

feedback was an improvised duet between myself and one of the dancers (estelle). the dance floor was divided into five areas, and a computer tracked estelle as she moved from zone to zone. the dancer's movements were limited to a small group of gestures, which she was free to sequence and perform in any order. while estelle danced, i played a small metal tube in various ways (ringing, blowing, tapping). the sounds i made were then processed and altered by the computer before being amplified in the room.

the type of processing applied to my sounds (repetition, pitch changes, delays, filters, etc.) was determined by where estelle was in the space. for each zone she moved into there was a corresponding process that the computer would use to alter my playing. at the same time, i was sending messages to estelle (through changes in the stage lighting) about how she should 'process' her movement. i could tell her to move very slowly, pause, repeat a gesture, etc.

in final section, heartbeats, three non-dancers sat on the stage with heartbeat monitors taped to their chests and audio outputs wired to their hands. hanging from the ceiling were a number of audio input jacks which were connected to the house speakers. the dancers carried lengths of wire which they connected to one another to form long cables. they then used the cables to connect the heartbeat monitors to the house sound system. when a connection was made, the sound of the amplified heart pounded loudly in the space. the dancers moved around the space, making and breaking connections between the heartbeats and the speakers.