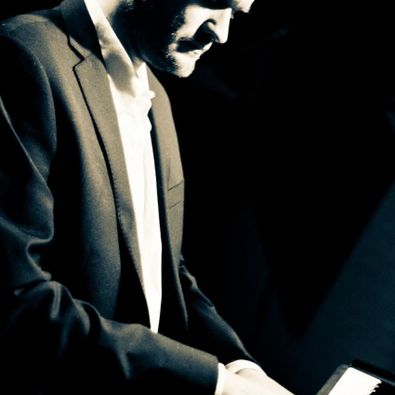 Tom Wetmore is a pianist, composer, and bandleader based in New York City. He received his B.A. in Government from Cornell University and his M.M. in Jazz Studies (Performance) from William Paterson University. He is pursuing his PhD at Columbia, where his research interests include jazz, African American music,  popular music, diaspora, modernity/modernism, cultural exchange, authenticity, individuality, and improvisation. His first album, The Desired Effect, is available on all major digital music services.

"Tom Wetmore's leader debut is quintessentially chill. It's surely a contemporary take on jazz, but don't call it smooth--at least not when alto saxophonist Jaleel Shaw is blowing torrid double-time solos... or when the leader is shuffling counterpoint lines like a casino card dealer.... A two-guitar frontline of Brad Williams and Justin Sabaj, alongside either Shaw or Eric Neveloff on sax, helps create Wetmore's shimmering signature sound of interlocking motifs.... This is a unique and strangely affecting first effort." (Bill Milkowski, JazzTimes)
"Tom Wetmore's new The Desired Effect (Crosstown) is both tantalizingly familiar and utterly strange. Which is a good effect indeed.... Though there are sparkling solos throughout the album, it's the overall sound of the pieces, the ensemble feel, that sticks with you. Most impressive is the three-way counterpoint that Wetmore explores -- often with the lead saxophone playing the melody while both guitars weave contrapuntal lines underneath.... So you're always getting a bright pop sheen on the surface with a complex pattern of inner voices below." (John Garelick, The Boston Phoenix)
"A debut brimming with bold statements, labyrinthine constructs and strong rhythmic undercurrents, marking Wetmore as one to watch out for in the future." (Dan Bilawsky, AllAboutJazz.com)

Further information can be found at his website, tomwetmore.com.