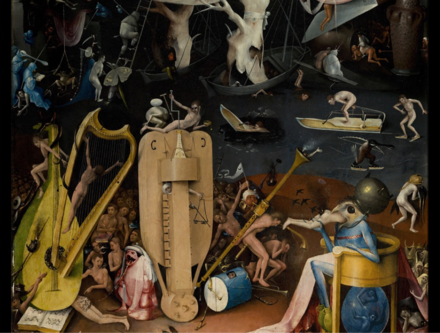 On Friday, April 7, at 2 pm, Emily Dolan will deliver her talk, "The Birth of Music's Technological Past," in the Historical Musicology and Music Theory Colloquium series.

Abstract
For most of the history of Western Art music, musicians and composers worked with new technologies: older instruments were routinely updated to meet changing needs, while many composers took a keen interest in the latest musical inventions. Questions of innovation have been a frequent theme in the organological and STS literatures, in which scholars have examined the motivation behind the creation of new instruments and the processes by which they enter mainstream use. But the very idea of innovation itself has a history, and we must ask when it became both meaningful and important to differentiate newly invented instruments—as well as those tending toward obsolescence—from other instruments. This talk explores the shifts in the nineteenth century that produced the modern landscape of the instrumentarium, one that includes a central canon of instruments, surrounded by more marginal objects that suggest experimental futures and bygone pasts.

Emily I. Dolan is the Gardner Cowles Associate Professor of Music at Harvard University. Previously, she was an associate professor of music at the University of Pennsylvania, where she taught since 2006. She specializes in late Enlightenment and early Romantic music and aesthetics. In particular, she focuses on issues of orchestration and instrumentality and on the intersections of music, science, and technology.

Dolan has published articles in Current Musicology, Eighteenth-Century Music, Popular Music, Studia Musicologica, Keyboard Perspectives, and 19th-Century Music. She is interested in the intertwined history of musical and scientific instruments: in 2011, she published a co-authored essay with John Tresch (UPenn, History of Science) in Opera Quarterly on the role and reception of machines in French grand opera and in 2013 Tresch and Dolan published “Toward a New Organology” in Osiris. In April 2008, she organized an interdisciplinary conference at Penn, Herder, Music, and Enlightenment, which explored the role of music in Herder’s philosophy. In 2009-2010, Dolan was a fellow at the Radcliffe Institute for Advanced Study, where she worked on her first book, The Orchestral Revolution: Haydn and the Technologies of Timbre (Cambridge University Press, 2013).

She received her PhD from Cornell University in 2006. In 2005, she was awarded the Alvin H. Johnson AMS 50 Dissertation Fellowship by the American Musicology Society. Currently, Dolan is working on a collaborative project on timbre with Alexander Rehding and on her second book, "Instruments and Order."