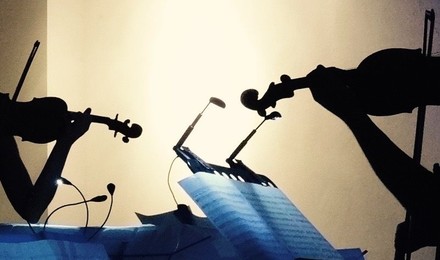 This program highlights “Impressionism” in the way that Murail speaks of it, as the opposite of “Expressionism.” By listening to the “post-”s of these two dominant -isms that divide the fin de siècle, we interrogate Murail’s assertion and explore how these styles both differ and overlap. As part of the Columbia Global Center’s Columbia Sounds series, we will hear how the two styles have fed the future by presenting works by younger Columbia-affiliated composers alongside one of the canonical representations of post-impressionist music.

Infuse was created in 2013 by two American musicians, composer Nissim Schaul and violinist Masha Lankovsky, who had been living in New York but relocated to Paris. They both independently discovered the new music scene in their new city to be very different to that of New York, particularly that there was a large gap in the programming of American and international contemporary composers in their new city.  They decided to create the organization Infuse with two components; one consisting of a flexible core group of musicians (Ensemble Infuse) to share with Parisian audiences repertoire they may not be familiar with, and the other establishing a series (Infuse Présente) that invites a variety of ensembles and musicians to perform in a year-round series of once-a-month concerts at a gallery in Paris called “l’Espace des Arts sans Frontières.” (And every once in a while, somewhere else.)

This concert is supported by a grant from the Alice M. Ditson Fund and is co-sponsored by the Columbia Global Centers | Paris, the Department of Music, the Columbia University Club of France, and Columbia Undergraduate Programs in Paris.

The Columbia Sounds 2017-18 season is supported by the Fritz Reiner Center for Contemporary Music.