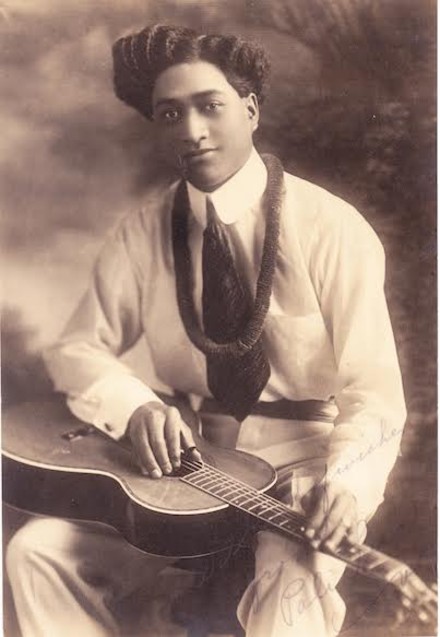 The Center for Ethnomusicology is please to present a colloquium presentation:

speaking on:
"Steel Bars and Hawaiian Guitars: (Re)Centering Indigenous Technology and Musical Practice within the Origins of the Modern Music Industry."

Free and open to the public!

The Hawaiian steel guitar profoundly altered the early twentieth-century sounds of the modern music industry. However, few scholars have acknowledged the instrument's role in shaping the soundtrack of modernity, let alone its indigenous origins.  In this talk, John Troutman will draw from his new book, Kīkā Kila: How the Hawaiian Steel Guitar Changed the Sound of Modern Music, in order to contemplate the efforts of Hawaiians to develop a new instrument within the context of intense colonial upheaval, and their impact along regional theater circuits and on New York City stages in the years that followed.

Interested members of the public are also invited to attend Prof. Fox's class "Music in Contemporary Native America" on Thursday, Nov. 3, 2016, from 6-7:30pm, to hear Prof. Troutman discuss his important first book, Indian Blues. Please defer to students in the class during discussion if you attend.

John Troutman is Associate Professor of History at the University of Louisiana at Lafayette. He received his doctorate in history from the University of Texas at Austin and his master’s degree in American Indian Studies from the University of Arizona. He has received multiple fellowships and grants from the Smithsonian Institution, the National Endowment for the Humanities, and the Andrew W. Mellon Foundation. His research agenda focuses on the historical significance of music in American life, particularly in the lives of indigenous peoples. His first book, Indian Blues: American Indians and the Politics of Music, 1879-1934, was favorably reviewed in journals that span the disciplines of American Studies, History, Musicology, Anthropology, Folklore, and American Indian Studies; among other accolades it won the Western History Association’s biennial W. Turrentine Jackson Award for a "first book on any aspect of the American West.” In May of this year, the University of North Carolina Press published his second monograph, Kīkā Kila: How the Hawaiian Steel Guitar Changed the Sound of Modern Music. The book chronicles the history of the Hawaiian steel guitar, from the cultural and political context that produced it in the Islands in the 1880s, to its role in shaping the sounds of modern music in North America and throughout the world.