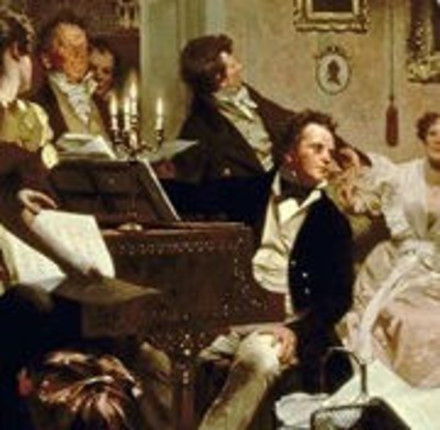 During the Superbowl this year Hyundai introduced its new Sonata by mentioning two other famous Sonatas that preceded it: Mozart's Piano Sonata in F major, and Schubert's Piano Sonata in A major. Schubert and his music are alive popular consciousness today, clearly, as they have always been since Schubert's own lifetime.

Though Lieder, part-songs—and Schubert too— have a long history of being associated with domesticity and private music-making, Schubert's music has always had a strong public presence as well. Schubert's life was one of social music making, from the family chamber music evenings of his youth to the social gatherings Schubert's admiringly called Schubertiads. Schubert's music was distributed amongst his friends and to the wider public through commercial publishing beginning in 1821 when Erlkönig appeared as his Op1. Schubert's impact on Viennese musical life was felt in the public arena as well: Schubert's music was performed by others in public and semi-public venues beginning in 1814; in the last few years of his life Schubert was the most-performed composer on the weekly concerts by the Wiener Gesellschaft der Musikfreunde.

We were joined by Geoffery Duce, who accompanied and played two pieces, the G-flat major Impromptu (the piece featured in Gattaca, performed by the 12-fingered virtuoso) and the Graz Fantasie, a work tenuously attributed to Schubert.