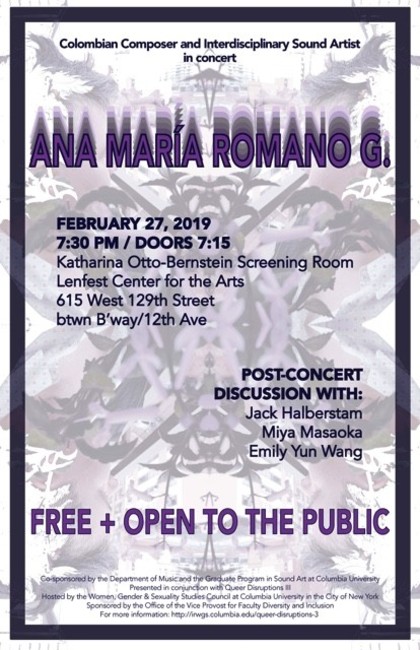 Ana María Romano G. is a Colombian composer and interdisciplinary sound artist. Her creative interests center around  acoustic and electroacoustic media and participation in interdisciplinary projects involving contemporary dance, videodance, performance and live arts. Her creative interests stem in the intersection of gender, sound and technology, listening, soundscape, noise, experimentation, improvisation, cyberspace, body and the political dimension of the creative. Her works have been published in physical support and by several netlabels in Latin America, Europe and North America and by the Red de Arte Sonoro Latinoamericano (Latin American Sound Art Network). Her writings have been published by different instituitons in Colombia and her artistic works have been featured in festivals in Argentina, Australia, Bolivia, Brazil, Canada, Colombia, Cuba, Chile, China, Ecuador, England, France, Germany, Greece, Italy, Mexico, Peru, Russia, Spain, Switzerland, United States and Uruguay.

Her interest in documentation led her to produce several publications such as CDs/multimedia, magazines, web platforms. She has been working on the legacy of the pioneering Colombian electroacoustic composer Jacqueline Nova since 1999, and curated the 2017 sound installation “Jacqueline Nova. El mundo maravilloso de las máquinas” (Jacqueline Nova, The Wonderful World of Machines) for the Museo de Arte Moderno (Modern Art Museum) in Medellín. She has organized numerous events throughout her career devoted to the diffusion of current creation (concerts, seminars, workshops, etc.) characterized by the presence of renowned artists. Currently, she teaches at Universidad El Bosque and is the director of Festival En Tiempo Real, event dedicated to the encounter between sound and technology with a gender focus. She has been nominated to the CLASSICAL NEXT INNOVATION AWARD 2019 (Holland), and been invited as a Keynote speaker in NIME (New Interfaces for Musical Expression) 2019 (Brazil) and she is a guest artist for the World Listening Day 2019 (Chile).

a statement… of sorts

to know oneself as multiple and available for transformation. to submerge oneself in the details in order to pierce sound layers, to deploy spaces, to test unimagined universes. to create without pomposity and in the fragility of the present. to prepare the work as a process in real time, as an exploration nurtured by experience, curiosity, surprise, fate, uncertainty. to search. to listen with the whole body. to dialogue with the error without fearing getting lost. to open up, to gather to give free rein to encounters that potentiate diversity (in sound, in creation, in life). sound is a living being, it has memory, it is collective, its transforms and affects us invariably. ¿noise, music, sound, silence? to inhabit, to interact, to share, to recognize, to remember, to fantasize, to collaborate, to construct, to coexist, to contemplate, to communicate, to experiment, to learn, to transit. each sound, each place, each being. to move away from anthropocentrism. to revalue certainty in order to clear the way for doubt and possibility.