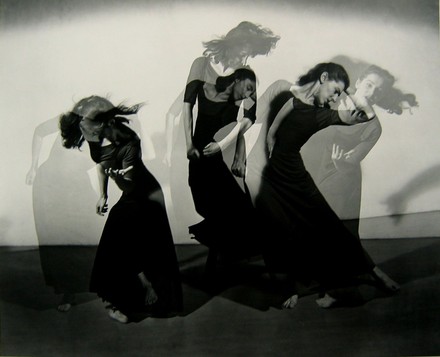 “An American—What is an American?” This question is spoken onstage in Martha Graham’s 1938 American Document, a dance commented on by countless critics and scholars from Edwin Denby and Lincoln Kirstein to Mark Franko and Susan Manning and now firmly ensconced in the canon of dance history despite the fact that its choreography has been unperformed for over half a century. What all accounts of American Document have in common is a dependence on the libretto of the dance-drama, published in Theatre Arts Monthly in September 1942, often considered alongside its contemporary reception and Barbara Morgan’s photographs. From here commentators have described the dance, variously, as “antifascist,” “nationalistic,” “[eschewing] degrading racial stereotypes,” and “metaphorical minstrelsy.” Using the previously unexamined, cue-and-choreographic-notes-laden, complete music score for Martha Graham’s American Document composed by Ray Green that I have pieced together from manuscripts at the Library of Congress and the New York Public Library—and of which I am making a recording for piano, drum, and speaker—my talk not only reveals what Graham’s pivotal dance sounded like (beyond the long-available spoken libretto) but also expands our knowledge of the dance’s larger structure and smaller discrete choreographic moments as well as how it resounds and refracts minstrelsy. Specifically, I will highlight how Ray Green’s score does and does not conjure the sound of minstrel shows in the “Walk Around” and “Cross-Fire” sections; how it drew on popular ideas about what Native American music sounded like; how the music for the “ecstatic” “Emancipation” section was figured as “African,” where and why the dance’s soundscape drew on a solo drum or silence apart from the dancers’ footfalls; and how, with American Document, Graham positioned herself in relationship to the ideals of the Left, Communism, and the still new “modern dance” in the late 1930s.

Daniel Callahan is a musicologist and dance scholar who researches how music moves people—dancers, musicians, orchestra conductors, and audience members—over the last few hundred years and today. He is currently finishing a book, The Dancer from the Music, that explores how US modern dance developed out of, depended on, and eventually distanced itself from canonical concert music. His article on John Cage and Merce Cunningham, “The Gay Divorce of Music and Dance,” appears in the Summer 2018 issue of the Journal of the American Musicological Society. He has a chapter on Aaron Copland’s Rodeo, Agnes de Mille, and Justin Peck forthcoming in the collection The Futures of Dance Studies. In May 2018 he had the honor of presenting the American Musicological Society’s Library of Congress Lecture, in which he shared his research on the relationship between Leonard Bernstein’s choreographic onstage conducting and very busy offstage life. Conducting Oneself, his second book project, explores how conductors have moved their bodies on the podium and how their personal identities and networks allow their careers to advance or not. Prior to joining the faculty at Boston College, he was the Mellon Postdoctoral Fellow in Music and the Humanities at the University of Chicago. He received his PhD from Columbia University in 2012.