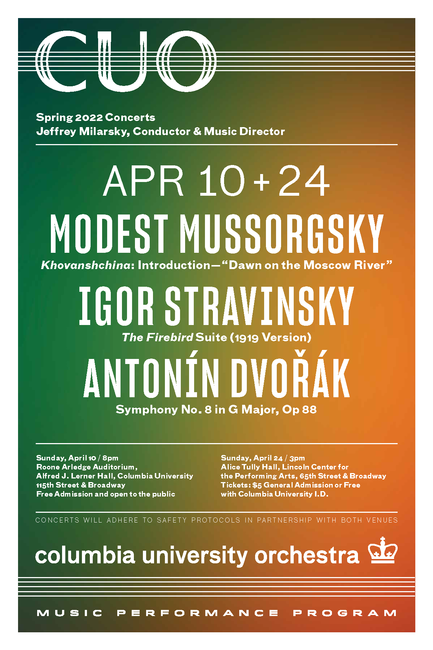 The Columbia University Orchestra (CUO) is thrilled to welcome audiences back to their first public performance in over two years. The last public performance took place in Fall 2019 prior to the outbreak of the COVID-19 pandemic, making this a highly anticipated event for student musicians and Columbia University at large. This performance marks the Orchestra’s fourth concert at Alice Tully Hall and their first appearance back at the Lincoln Center venue in five years.

Maestro Jeffrey Milarsky says: “Our return to Lincoln Center has been made possible by a miraculous gift from a Friend of the Columbia University Orchestra. Heather Norgard, Senior Director of Columbia College Parents Fund, has worked tirelessly to secure the future of the CUO. The CUO will perform at Alice Tully Hall once a semester for the foreseeable future. The experience of performing in a hall with such rich and sumptuous acoustics is something that cannot be described in words. When COVID appeared in 2020, the CUO, like many other performing arts groups, had to adjust. Every effort was made for us to stay connected through music even while we could not be together. Our curriculum included lectures, musical analysis, and culminated in a YouTube performance. This live concert is a new beginning, a rebirth of artistic energy, and a clear demonstration of the incredible talent found within the halls of Columbia University.”

The program will begin with the introduction to Modest Mussorgsky’s opera Khovanshchina, “Dawn on the Moscow River,” led by Assistant Conductor Emily Praetorius. Maestro Jeffrey Milarsky continues the rest of the program with the 1919 version of Igor Stravinsky’s The Firebird Suite. After a brief intermission, the orchestra will perform Dvořák’s Symphony No. 8 in G Major. The concert will be free of charge for those with a Columbia University ID card and $5 for the general public. Tickets will be sold the day of the performance at the Alice Tully Hall box office and one hundred free tickets will be left at will-call for those with a Columbia University ID. The orchestra will give a performance of the same program at Roone Arledge Auditorium in Alfred J. Lerner Hall, Columbia University on Sunday, April 10, 2022 at 8:00pm. This concert will be free of charge and open to the public. The performances will adhere to safety protocols in partnership with both venues.

Our performance at Alice Tully Hall is generously sponsored by a friend of the Columbia University Orchestra.

CONCERTS WILL ADHERE TO SAFETY PROTOCOLS IN PARTNERSHIP WITH THE VENUE