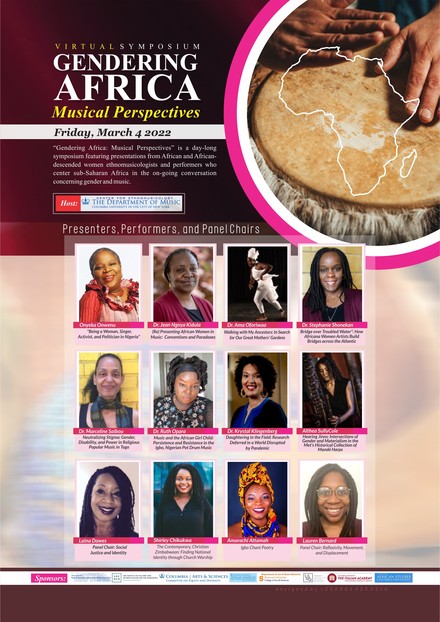 “Gendering Africa: Musical Perspectives” is a day-long online symposium hosted by the Center for Ethnomusicology, in the Department of Music at Columbia University. It will feature presentations from African and African-descended women ethnomusicologists and performers who center sub-Saharan Africa in the ongoing conversation concerning gender and music. It is designed to locate, highlight and put in dialogue the perspectives and lived experiences of women of African descent in the discourse on gender and music in Africa. This focus resists both sub-Saharan Africa’s peripheral status within the discourse on gender and music and the neglect of gender perspectives within Africanist ethnomusicology on topics ranging from performance practices to musical instruments to music and identity. Topics covered also represent a broad geographical scope that clarify the depth and breadth of the African landscape in the conversation on music and gender. Click here for full-sized poster image.

Registration is free but required. Register in advance for Symposium at this link:

For more information about the event, visit the event website.

Dr. Jean Ngoya Kidula is Professor of Music (Ethnomusicology) at the University of Georgia in the USA.  Her research has centered on ritual and religious music of Africa and its historic and present diaspora, centering on Christianity. Her award-winning book Music in Kenyan Christianity: Logooli Religious Song exemplifies her specific focus on Eastern Africa. Ngoya Kidula also interrogates traditional canons in music studies in Africa and the US.

Onyeka Onwenu is a Nigerian singer, songwriter, actress, social activist, journalist and public administrator. She blends popular, folk, and gospel into what she calls development music. Onyeka Onwenu uses her art to address social issues of the time. Her recent book My Father’s Daughter,” has been described as “a riveting narration of Onyeka Onwenu’s enthralling journey through life. We are held captive as she takes us into her world -from the heart-warming affection of her father to living through the anguish of the Nigeria-Biafra war, from a remarkable mother’s love to family intrigues, from feminism to a career that has put her in the limelight for decades. Ma Onwenu is a graduate of Wellesley College, Wellesley Massachusetts and the New School for Social Research in New York.

Dr. Ama Oforiwaa Aduonum is a researcher, scholar, teacher, and performer of African and Black Atlantic music styles and traditions. Currently working on Black People, Thank You!, the third in the Walking with My Ancestors’ award-winning performance sequence, she is a professor of ethnomusicology at Illinois State University at Normal, IL. Aduonum’s methods blend creative expression, scholarship, and experimental performance; her teaching of undergraduate and graduate students is organic and original, often through call and response and creative activities. She employs de-colonialist discursive frameworks to foreground experiential approaches and performative-scholarly discourse.

Stephanie Shonekan is Senior Associate Dean of the College of Arts & Science and Professor of Music at the University of Missouri. In 2003, she earned a PhD in Ethnomusicology and Folklore with a minor in African American Studies from Indiana University. From 2003-2011, she taught at Columbia College Chicago, and from 2011-2018, she was a faculty member at the University of Missouri in the Black Studies Department and the School of Music. From 2015-2018, she was chair of the Department of Black Studies at the University of Missouri.  From 2018-2020, she was professor and chair of the W.E.B. Du Bois Department of Afro-American Studies at the University of Massachusetts, Amherst. Shonekan's dual heritage combining West Africa with the West Indies allows her to straddle the black world comfortably.  She has published articles on afrobeat, Fela Kuti, as well as American and Nigerian hip-hop.  Her publications explore the nexus where identity, history, culture and music meet. Her books include  The Life of Camilla Williams, African American Classical Singer and Opera Diva (2011), Soul, Country, and the USA: Race and Identity in American Music Culture (2015), Black Lives Matter & Music (2018), and Black Resistance in the Americas (2018).

Dr. Marceline Saibou is an Assistant Professor of music at Bowdoin College. Her research focuses on popular music in postcolonial Togo, in particular on articulations between music and state power. Her more recent work engages questions of music and disability in West Africa. She earned her doctorate in ethnomusicology from Columbia University.

Dr. Krystal Klingenberg is a curator of music in the division of Cultural and Community Life at the Smithsonian’s National Museum of American History. Previously she held professorial positions at Swarthmore College and the University of Hartford. She received her PhD in May 2019 from the Music Department of Harvard University, with a secondary field in African and African American Studies. Her dissertation-turned-book project is on the creation and distribution of Ugandan mainstream popular music.

Dr. Ruth Opara is an Assistant Professor of Music Histories and Cultures in the Department of Art and Music Histories at Syracuse University. Her research interests include African and African diasporic music traditions and the production of knowledge; women in music and the decolonial discourse; music and gender; African music and transnational encounters.

Althea SullyCole is an ethnomusicologist and multi-instrumentalist from New York City. She has studied her primary instrument, the kora, a 21-stringed harp from the Mandé region of West Africa, for 10 years, 3 of which were spent in Dakar, Senegal. She is currently a doctoral candidate in Ethnomusicology at Columbia University. She is also a Sylvan C. and Pam Coleman Memorial Fellow in the Musical Instrument Department at the MET, where she is conducting an interdisciplinary study of the MET’s collection of musical instruments from the Mande region of West Africa. She is particularly interested in how a detailed, comparative study of these instruments might help address questions regarding cultural belonging and identity formation both within the Mande context and the larger African diaspora.

Amarachi Attamah is a graduate student in the Department of Museum Studies and Cultural Heritage Preservation at Syracuse University, New York State. She is a Chant Performer, Poet, Broadcaster, and a Mother-Tongue Advocate. Her core interests are indigenous language sustainability, culture curation, and intangible heritage preservation. She has performed in Nigeria, Ghana, South Africa, the United Kingdom (where she recently completed a four-month performance fellowship with the British Royal National Theatre), and the USA.

Laina Dawes is an ethnomusicologist and the author of What Are You Doing Here? A Black Woman’s Life and Liberation in Heavy Metal (Bazillion Points, 2012). She is also a music and cultural critic whose writing can be found in print and online magazines, such as Hazlitt, Bitch, SPIN, Cuepoint, Wondering Sound, Flavorwire, Refinery29, MTV Iggy, MySpace, The Wire UK, NPR, Toronto Star and Exclaim! Canada.

Lauren Bernard is a PhD student in Historical Musicology at Columbia University. Her current research interests include the perception of race in timbre and sound, musical constructions of alterity and identity, and Afrofuturism.