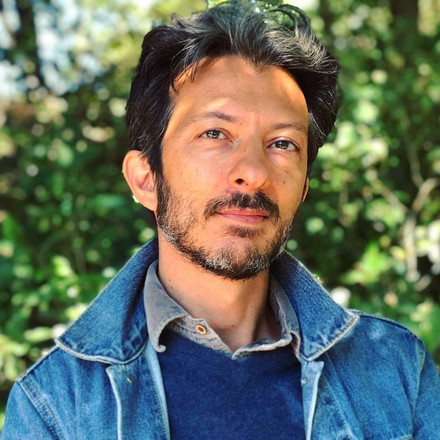 Mr. Arjomand will present an electrifying program tuned to the present moment. Having gained wide renown especially for his complex, long-form improvisations, he performs at the Academy’s Teatro without a live audience, in accordance with guidelines from the CDC and the University.

We hope you can join us October 29 at 7 PM, but video of Mr. Arjomand's performance will subsequently be available on our website's "Past Events" page.

Ramin Amir Arjomand is an Iranian-American composer, pianist, improviser, conductor, and educator based in Brooklyn, New York. His music has been presented by the International Computer Music Conference, Speculum Musicae, the New York Virtuoso Singers, So Percussion Ensemble, the Cassatt Quartet, TAK Ensemble, the Columbia Collegium Musicum, and numerous independent ensembles and soloists in venues throughout the United States, Europe, the Middle East, and Asia.

For the Italian Academy’s 2020 Summer Online Festival, Ramin performed an improvisation and discussed his work with Youssef Amin (of the Max Planck — NYU Center for Language, Music and Emotion), and he participated with other festival musicians in a rendition of Julius Eastman’s Gay Guerrilla, the summer festival’s finale.

As a pianist whose evening-length solo improvisations have been reviewed as "grand, tectonic, torrential as the forces of nature unleashed, yet fully under control" (Nader Ardalan), Arjomand has performed internationally as a soloist and in ensembles presenting his own works. His approach cultivates spontaneity and thrives on questioning the need for pre-conceived formal structures in composition and performance. His electroacoustic music, based in a Logic digital editing environment, works primarily with recorded improvised sound material.

Arjomand has worked extensively as a composer, pianist, lecturer, and musical adviser with the Barnard College Department of Dance. His approach to dance theater composition emphasizes contrapuntal relationships between sound and movement. He has worked to develop collaborative models in which composer and choreographer can trust one another to work freely and independently toward a common goal. His collaboration with choreographer Laveen Naidu, Like arrows in the hand of a warrior, daybreak, was commissioned by the Barnard Dance Department and presented in Miller Theatre in New York City.

A highly sought-after teacher, Arjomand is currently on the faculty at Columbia University and the Steinhardt School at New York University.

Listen to an interview with Ramin Amir Arjomand on The Earfull, where he discusses his early life in Tehran, the secrets of counterpoint, and truth and trust in performance.

Visit the event page for even more info!